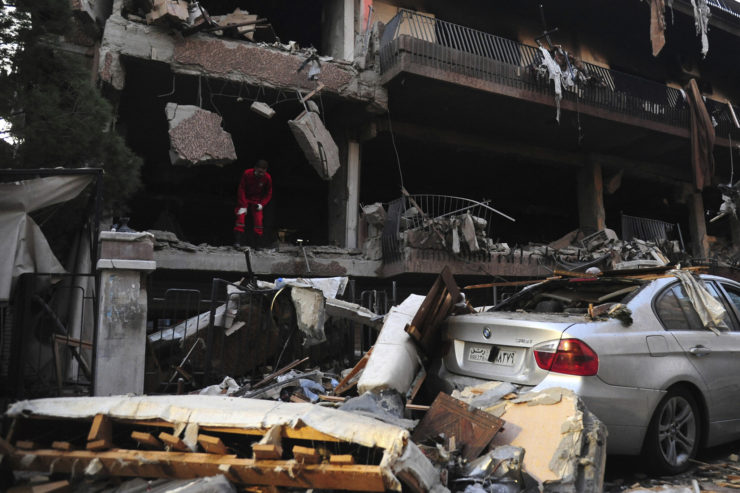 Three civilians were killed and four others were injured, including a child, as a result of shrapnel of incoming Israeli missile that fell on houses of the people in l-Hujaira and Al-Adliya towns in Damascus countryside. (source: SANA)

Earlier, the Syrian army air defenses intercepted an Israeli missiles fired from over Lebanese airspace, towards Syrian territory and downed most of the them.

Syrian media reported that the airstrikes attributed to Israel targeted the Mezzeh military airfield outside Damascus.

The Syrian Observatory for Human Rights, an opposition war monitor, says that areas where militias loyal to Iran are based, south and southwest of Damascus, were attacked by Israeli missiles before dawn.

The watchdog says some of the missiles, shot from Lebanon, were downed by Syrian air defenses, appearing to confirm a state media report.

Also, The Syrian Observatory for Human Rights says that at least four pro-Iranian militiamen were killed in an airstrike attributed to Israel outside Damascus earlier this morning.

A number of Iranian buildings were also destroyed in the attack, according to the Britain-based Syrian war monitor.

It says three civilians were killed by shrapnel, though it’s unclear if it came from the missiles or from air defense projectiles during the predawn exchange.

Header: Photo released by the Syrian official news agency SANA, a Syrian official checks the damage of a building targeted by Israeli missile strikes in the early morning in the Mezzeh area in the capital Damascus, Syria, Tuesday, Nov. 12, 2019. (SANA via AP)