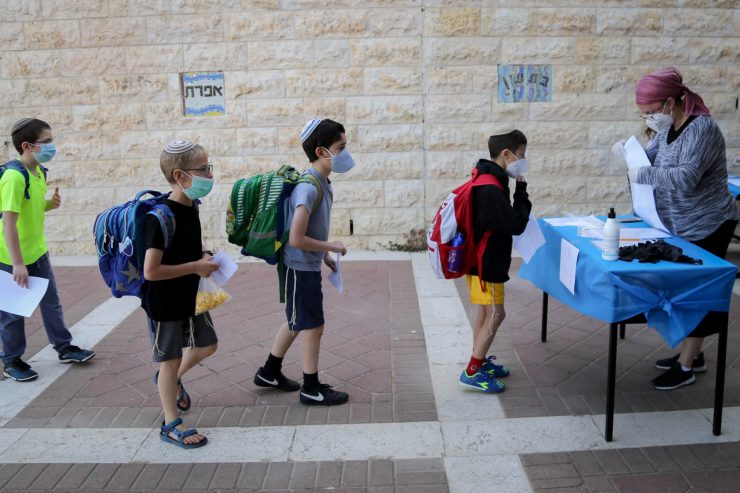 The cabinet agreed early Friday to extend Israel’s national lockdown until 7 a.m on Sunday following a chaotic night that saw an initial decision to continue the closure overturned by the attorney general and angry exchanges between Prime Minister Benjamin Netanyahu and Defense Minister Benny Gantz.

The decision was made as Israel’s toll from COVID-19 topped 5,000 fatalities.

According to the compromise deal hashed out and unanimously agreed in the early hours of Friday, the lockdown will be extended until Sunday morning, at which time individual travel limits will be lifted.

People have been largely restricted to within 1,000 meters of their homes under the lockdown.

Businesses that do not cater to the public will be able to reopen Sunday. Also allowed to reopen will be restaurant takeaway services and individual business interactions, like hairdressers, cosmeticians and barbers.

National parks will also reopen and holiday rentals will be allowed to cater to single families.

No agreement was reached regarding reopening kindergartens.

A government statement said a decision on this would be made following separate discussions between the Health and Education Ministries.

Netanyahu hailed the compromise, saying there had only been minor changes to the initial Health Ministry proposal, called on the public to continue to take precautions and urged them to go and get vaccinated.

“As more people get vaccinated, with an emphasis on the over 50s, we will be able to gradually, carefully, and responsibly open up the economy,” he said.

The eventual agreement was reached following a dramatic cabinet meeting in which Attorney General Avichai Madelblit overturned an initial vote to extend the lockdown until Sunday night, saying that under the terms of the coalition agreement, the decision needed to be unanimous.

His abrupt ruling after midnight Thursday followed an angry government meeting where Gantz and his fellow Blue and White Ministers refused to endorse the extension.

Netanyahu and Gantz accused each other of playing with the lives of Israelis in a bid to gain political momentum ahead of the upcoming March elections. The turmoil came minutes after the Health Ministry released figures showing that Israel’s death toll from the pandemic had passed 5,000.

Mandelblit explained that he was not blocking the lockdown extension but, rather, enforcing Israel’s quasi-constitutional Basic Law: The Government, as amended by Netanyahu and Gantz in their coalition agreement last year.

Gantz and fellow ministers from the Blue and White party opposed the decision to extend the lockdown, which was due to expire at 7 a.m. on Friday, unless or until there was a clear exit plan outline to present to the public. But Netanyahu and the Health Ministry had been much more reluctant to set anything in stone.

Netanyahu called a vote to extend the lockdown until Sunday at midnight, saying the cabinet would meet again on Sunday and reevaluate the situation in a bid to start formulating a plan to exit the lockdown, now entering its fifth week.

But Blue and White voted against and then appealed to Mandelblit, who canceled the vote. A furious Netanyahu accused Gantz and Madelblit of colluding.

Gantz “wants as much serious morbidity as possible for the elections,” Netanyahu charged, according to the Ynet news site. “You are condemning many Israelis to a terrible death.”

Gantz shot back: “Don’t come with your stories and don’t try and teach me about the value of life.”

After the vote, Netanyahu had slammed the Blue and White ministers.

“You are bringing death to the people,” Ynet quoted Netanyahu as saying. “This is a clear political exercise of yours. The responsibility for the lives of the people is yours.”

Mandelblit’s deputy Ran Nizri urged the ministers to reach an agreement. “Don’t bring us to chaos,” he said.

Minutes before the vote, the Health Ministry announced that Israel had passed the grim milestone of 5,000 dead.

Ministry figures showed that there were 1,040 people in serious condition and 7,439 new “cases” reported Wednesday. Israel has struggled to bring its cases down despite its advanced vaccination drive.

With the lockdown set to expire at 7 a.m. on Friday. Gantz demanded during the meeting that the cabinet allow for the economy to begin reopening on Friday, while Health Ministry officials were pushing to have it extended until Sunday at midnight, at which point the lockdown would be lifted gradually in three separate stages.

But according to Hebrew media, the ministry’s plan faced pushback from Ran Balicer, the chairman of the national advisory team of experts counseling the government on its COVID-19 response.

He argued that too many Israelis have been violating the current lockdown and that the country would not be able to meet the proposed benchmarks for reaching the second stage of reopening the economy. Balicer proposed that the lockdown be allowed to expire at midnight on Friday, saying the only effective tactic to contain the pandemic was to push forward with the country’s vaccination drive.

Tempers flared during the meeting, with Gantz blasting Netanyahu for delaying the session several times after it was supposed to have taken place on Monday.

The Blue and White chairman also lamented cabinet secretary Tzachi Braverman’s failure to update ministers in advance as to what would be discussed at the meeting, according to Army Radio. The prime minister retorted that Gantz was seeking to manufacture headlines and was motivated by petty politics.

“When there’s no choice, you close things down, but when you can, you should open. I believe it is now possible and necessary to open,” Gantz was quoted by Hebrew media as having told ministers. “Lockdowns have stopped being an effective work plan and solution.”

The defense minister said the government should immediately remove the current ban on traveling more than a kilometer from one’s home, allow businesses with in-person service to reopen, and other limited steps.

Next week, Gantz said, schools should start reopening, as should stores and businesses adhering to COVID-19 regulations.

For its part, Health Ministry officials have recommended reopening kindergartens and grades 1-2 and 11-12 in low-infection cities and towns starting next week, according to Army Radio.

Balicer’s panel of experts advising the government recommended that only vaccinated teachers be allowed to teach in person when the lockdown is lifted, according to reports.

As of Wednesday, just 53 percent of teachers have received the first dose of the vaccine, and 27% have gotten both doses, despite being prioritized for eligibility.

The experts further recommended opening kindergarten to second grade in low-infection areas, as well as resuming classes for 11th and 12th graders, but only if the teenage students are vaccinated.

They recommended keeping schools in high-infection towns and cities closed for the time being.

However, if the government chooses to reopen some school grades next week exclusively in low-infection areas per the reported Health Ministry plan, most of Israel’s major cities won’t make the cut, according to data from earlier Wednesday.

At the beginning of the meeting, ministers approved a proposal to double fines for lockdown violators.

A school with up to 35 students caught open in violation of the lockdown will be fined NIS 5,000 ($1,519), and institutions larger than that will be fined double the amount.

The updated fines will go into effect on Friday.