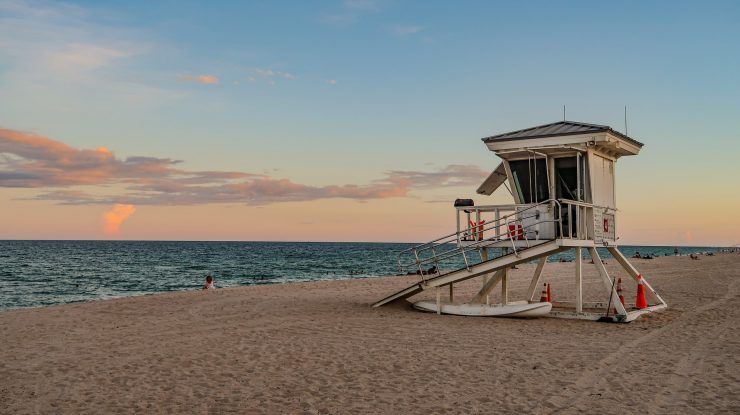 When the media frantically warns of record spikes of coronavirus cases in Florida and several other southern states and predicts these states will become the next epicenter for the virus, people automatically conjure up images of Italy and New York City. Naturally, that is the desired result of the media-driven panic. In fact, the media has been predicting Florida would become the next New York since early April. However, once you study the data on who these states are testing and why testing is going up yet deaths are still declining every day, it becomes clear that the reality is the exact opposite of the panic the media is pushing.

The reality is that what happened in New York City in March was an anomaly, and its unique dynamic is not migrating to other states.

In fact, the virus continues to prove itself less deadly than previously thought and likely becoming milder as time goes on. Several weeks into the superficial spike in cases, deaths are plummeting, reaching the lowest level on Sunday since the beginning of the epidemic and down 90 percent since the peak.

Only 297 reported deaths today with the 7-day avg falling to 592. Sunday’s are low due to weekend reporting lags, but today’s figure is the lowest for a Sunday since Mar 22. pic.twitter.com/w9vLEVsute

During the peak of the virus in April, Miami-Dade County found through a serology test that the likely number of people infected was 16.5 times higher than the number of known cases. We also now know that an unknown percentage of people who get the virus, particularly those who don’t present symptoms, don’t even produce antibodies because their bodies ward off the virus with T cells.

It’s therefore not surprising, as testing becomes universal in doctors’ offices, hospitals, workplaces, and particularly in hot spots such as prisons, migrant labor, nursing homes, and meatpacking plants, that even if the virus is generally abating, we will discover more cases than even during the peak, especially in states that had a mild peak. Also, with the national obsession with testing, officials are now counting multiple positive tests for one patient as well as antibody tests that have all become more widespread in the past month. We never knew how many cases really existed during the peak weeks, because we were only testing those with serious cases, usually older and sicker people. Therefore, there is no way to track the true growth or decline of positive cases in a given state because we don’t have a fully transparent starting point.

It also makes sense that we will see these illusory increases, particularly in the southern states that were never hit hard. Because they had relatively few deaths, they didn’t test nearly as much as states that got hit hard like New York and New Jersey. Thus, the earlier numbers of cases were very low. It therefore doesn’t take much to see an increase once testing becomes universal. Unlike in New York, the increases are coming from a very low baseline that is not causing a strain on the hospitals.

The media is acting like the discovery and even possible spreading of new cases will be a New York situation. But the increased cases have been going on for a number of days, yet the new daily deaths continue to be nearly nonexistent in a state of 21 million people and many seniors.

Florida covid deaths by date of death. Thanks to @gummibear737 for the chart.

Hope this trend continues, though that will definitely make @DWUhlfelderLaw sad.

We know how it tickles his grim little reaper to see things get worse. pic.twitter.com/DQoFbb6SC6

If anything, this dichotomy of more known cases, yet barely any deaths demonstrates that the entire fear of the virus itself has been disproportionate relative to its actual threat, especially outside senior facilities. As the Ft. Lauderdale mayor recently said, officials have not seen a large community spread from the opening of businesses and venues, and the virus appears to be much weaker in those it has infected.

The virus also appears to already have gone through most of the vulnerable population and is now targeting younger people who don’t get too sick from it.

According to Florida officials, the median age of those infected has gone down from 65.5 during the peak to 37. We now know from a new study in Italy of 4,326 individuals infected that 69.1% of those under 60 were asymptomatic.

This chart from the Florida Department of Health says it all: 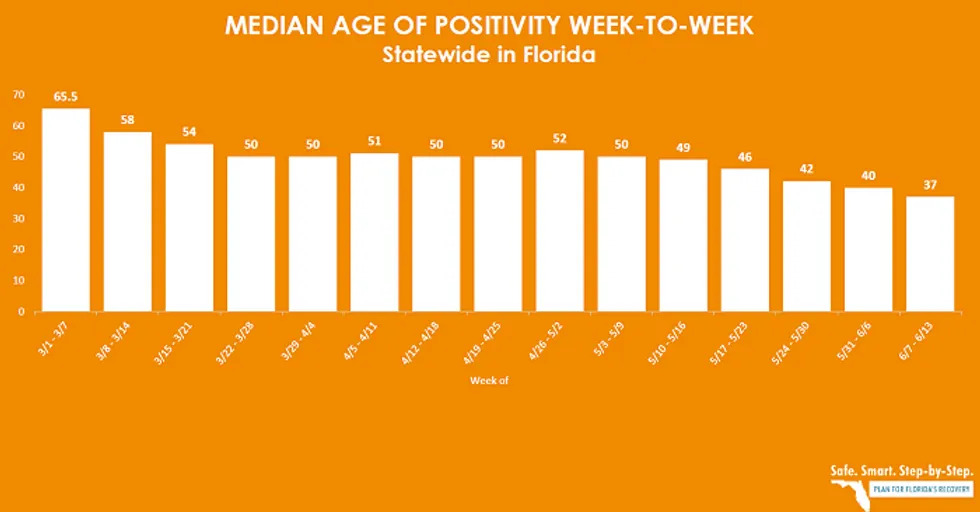 As you can see, there is nothing unique that has happened in recent weeks.

The median age of known cases has been going down from day one as testing became universally available. It started with seniors who had bad cases and now reflects roughly the median age of the population. It’s not that younger people don’t get the virus (although children are infected at a lower rate); it’s that very few get critically ill from it. Also, not a single child has died in a state of 21 million.

That explains why we are not seeing a jump in ICU and ventilator usage like we did in April.

There were more deaths in Florida among those over 90 (a much smaller cohort) than among everyone under 65. There are even fewer deaths among all ages if you isolate the data for deaths in senior care facilities.

So the fact that most of the new infections are in people under 50 demonstrates that this is not something to panic over.

It also explains why so many people in the hospital are now being pegged as COVID-19 patients when they are in the hospital for other reasons. Prior to universal testing, anyone who came in for a car accident, heart attack, kidney stone, or broken bone was not tested. Now all those younger, asymptomatic, or mildly symptomatic cases are being detected through the natural interaction with the health care system that is running normally again. On top of that, there are now many more people in the hospitals for all reasons, now that elective procedures have continued, people are no longer scared away from ERs, and there is likely even an increase in hospitalizations to make up for the lost care during the virus peak in April.

More broadly, what we are seeing in the states, mainly in the South, that are now being dubbed as hot spots, is a true flat curve. To flatten a curve means to drag out cases for a longer period but avoid a steep surge of serious hospitalizations and fatalities. Thus, the current increase in cases, the overwhelming majority of them minor, is a feature of a better outcome, not a bug.

Florida’s hospitalizations were never a problem during the peak weeks like they were in New York and are not a problem now.

All things considered, Florida and North Carolina would rather experience a longer curve without the immediate decline than what New York experienced. Ironically, the draconian shutdown did nothing to save lives in New York, as 66% of those who were hospitalized were people who were staying at home, so Florida has no incentive to go that route.

Recently, the New Yorker warned that in Florida, 12,673 people are hospitalized with coronavirus. The media is still trying to give you the impression that Florida has become like New York City at its peak, when roughly the same number were hospitalized with COVID-19 in early April. In fact, Florida never had more than 2,000 people hospitalized at once, just 3.5% of capacity. The 12,673 is the cumulative number since March. Florida still has far fewer people in ICUs than it did during its peak, which was itself was much milder than the peak in many other states. Florida is also more than two and a half times larger than New York City.

Aside from the fact that almost everywhere outside the New York City area never experienced a plague anywhere on par with the degree of hype, it appears that the virus is getting less deadly over time.

Italian doctors have observed that the viral loads are lower and the patients in the hospitals, including even elderly patients, are not in dire straits like they were in March and April.

This explains how the rate of cases seems to be going up in at least 20 states, yet the deaths continue to plummet. Every day last week set a new low for deaths by day of the week since the epidemic took off in late March. Deaths have been declining by as much as 20 percent every week, even as the cases have increased since late May in many states.

Hospitalizations and ICU usage are also not on the rise nationwide, despite jam-packed protests in nearly every state for the past three weeks.

we can look at ICU over the same period and see that it has not mirrored the rise in hospitalization and has been dropping steadily. pic.twitter.com/ZjWzKgLJGA

To begin with, in places like North Carolina, which the media is dubbing a hot spot, the infection fatality rate was only 0.1%, and that includes the lopsided numbers from senior care facilities. Unlike in New York City, states like Florida and North Carolina appear to be experiencing what Singapore and Qatar had with migrant workers causing a spike in cases, but because they were young, there were very few deaths.

At some point, the media needs to stop spinning all news on coronavirus as bad news. A flat curve is exactly what we wanted. Short of full eradication of the virus, which absent a vaccine is not in our control, properly shielding the vulnerable while having younger people go out and achieve immunity was always the goal.

The concern was that this virus was somehow too dangerous to the younger population to achieve that goal.

The dramatic dichotomy between the multitude of new cases and the low number of deaths proves that panic prediction wrong. In that sense, the discovery of more cases is actually a good thing.