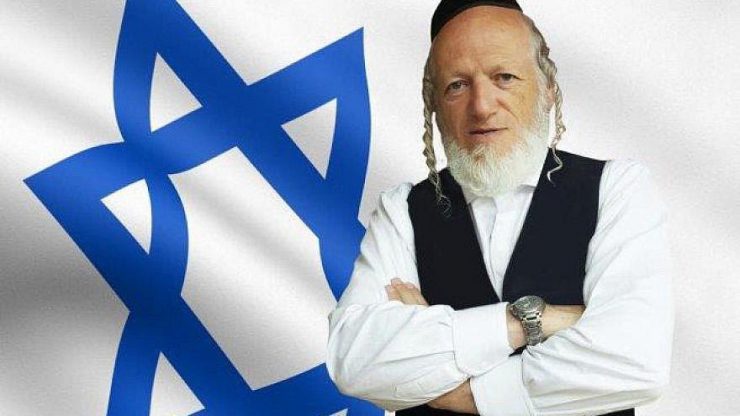 As fresh accusations of sexual abuse against ZAKA founder Yehuda Meshi-Zahav continue to emerge, one alleged victim has charged that ultra-Orthodox rabbis have prevented those he abused from going to the police.

Speaking to Channel 12 in an interview broadcast Friday, the unidentified man said that high-profile rabbis were continuing even now to stop people from coming forward and filing formal charges.

A bombshell report by the Haaretz daily last week that touched off a firestorm of accusations against Meshi-Zahav has been followed by near-daily revelations about alleged malfeasance and concealment.

The man, who identified himself only by his first initial L., said that knowledge of Meshi-Zahav’s activities was widely known.

“He would come to the neighborhood with his new car and let all the children ride in it inside Mea Shearim and that was when he would busy himself with them,” the man said. “It’s not something we heard — we saw and experienced it.”

“L” blamed community rabbis for actively stopping allegations from leaving the community and said they continued to do so now.

“It’s not that they sat idly by and did not do anything — one night this week I was urgently summoned to a very important rabbi and he said to me: ‘A police report is a desecration of God’s name and does even more damage [than the abuse].’

“What could I do? I had tears in my eyes,” he said, adding that he still had no intention of filing a police report because he could be branded a “moser,” an informer who betrays fellow Jews to secular authorities.

The insular ultra-Orthodox community frequently tries to intimidate members who speak out about internal problems.

“I have a rabbi and I do what he tells me,” said L. “If they would just declare that we are not ‘mosrim,’ if they would give us permission to go and testify, just see what would happen.”

Fresh allegations of sexual abuse against Meshi-Zahav surfaced Thursday, the latest in a string of accusations by at least half a dozen people that include charges of rape and other sex crimes.

New alleged victims spoke with Haaretz after the initial report, including a 40-year-old woman who said she was assaulted in 2014, at age 33, when she turned to Meshi-Zahav for help. The case is significant because it appears to be within the statue of limitations, although the woman has not gone to police.

The ZAKA founder, a prominent figure in the ultra-Orthodox community, began touching the woman’s chest against her will in his office, she said.

He continued groping her, despite her protestations, with the door open and without any apparent fear of being caught, she told Haaretz. Previous reports have said Meshi-Zahav’s misdeeds were widely known in some parts of the ultra-Orthodox community, and officials in ZAKA may have also been aware.

The woman, who was only identified by her first initial, also L., said she fled the building in tears and wasn’t able to tell anyone about the incident for years. She believes that if she had stayed in the room she would have been raped.

The police opened a case into Meshi-Zahav last week, and have received at least one formal complaint. Many of the currently known cases against him fall outside the statute of limitations. L.’s case is recent enough to be a potentially chargeable offense, but she is too afraid of Meshi-Zahav to file a formal complaint, she said.

Haaretz on Thursday described several other alleged offenses by Meshi-Zahav that came to light following the initial investigation.

One of the alleged victims was eight years old in 1981, when, he said, Meshi-Zahav had him sit on his lap in a sexual manner.

Another man who was 14 at the time of an alleged incident in 1997 said Meshi-Zahav undressed and licked him.

In a third new alleged incident, a woman said Meshi-Zahav masturbated several times while watching her from his car when she was 12-years-old in 1994.

The witnesses described a widespread awareness of Meshi-Zahav’s deviance and a fear of speaking out. One said, “Everyone knew about it. I don’t understand why it’s blowing up now.”

Haaretz also obtained a recording in which Meshi-Zahav appears to be organizing a group sex event.

In the recording, Meshi-Zahav is speaking to a man who works in prostitution, and asks him to organize several people for a group sex session with a woman he knows.

“Listen, she’s sick, she wants a gang bang,” Meshi-Zahav says in the recording. “She wants five guys who will turn her into a slut, a sex slave.”

A lawyer told Haaretz the call was “an inappropriate discussion between friends without any meaning to it.”

The report said that the planned gathering did in fact take place.

A Thursday report by The Times of Israel uncovered allegations that Meshi-Zahav also has a history of financial malfeasance.

According to public court filings, Meshi Zahav set up a private for-profit company, also called ZAKA, which for years raised millions of dollars in the charity’s name. Reports have alleged that he and his family kept some of the money, using it as a slush fund.

A man filed a sexual assault complaint Wednesday against Meshi-Zahav. The alleged victim, reportedly a man in his 40s, arrived at the Lahav 433 serious crime unit and told investigators that Meshi-Zahav had molested him when he was 14 and tried to rape him. According to Hebrew media reports, the man said the assaults continued for a period of time.

Though the man’s complaint apparently cannot be prosecuted due to the statute of limitations, it could serve to bolster any future complaints that go to trial.

Also Wednesday, Channel 13 news reported that police received new information on an alleged victim of Meshi-Zahav — a woman who claims he raped her four years ago.

The woman alleged that Meshi-Zahav sexually assaulted her in a Jerusalem hotel, according to the report. No official complaint has so far been filed.

Meshi-Zahav, who had initially denied the allegations against him, will defend himself by claiming that all sexual relations were consensual, Channel 12 News reported Tuesday.

The station, citing unnamed associates of Meshi-Zahav, said he will at most say relations were in exchange for money, gifts or other benefits.

With this defense he hopes to evade conviction for more serious alleged offenses, including rape, the report said. It was not clear how the defense would apply to alleged offenses against minors.

Some victims are likely afraid to come forward given Meshi-Zahav’s eminent stature and long-held ties with law enforcement. ZAKA is a major part of Israel’s emergency response services at home and abroad.

Earlier this month, Meshi-Zahav was declared a winner of the Israel Prize’s lifetime achievement award for his contributions to Israeli society.

Education Minister Yoav Gallant announced that the prestigious prize would go to Meshi-Zahav for his decades of work in ZAKA. In 2003, he lit a torch at Israel’s national Independence Day celebrations.

On Friday, Meshi-Zahav announced that he was stepping down from his role in ZAKA and also giving up the Israel Prize.