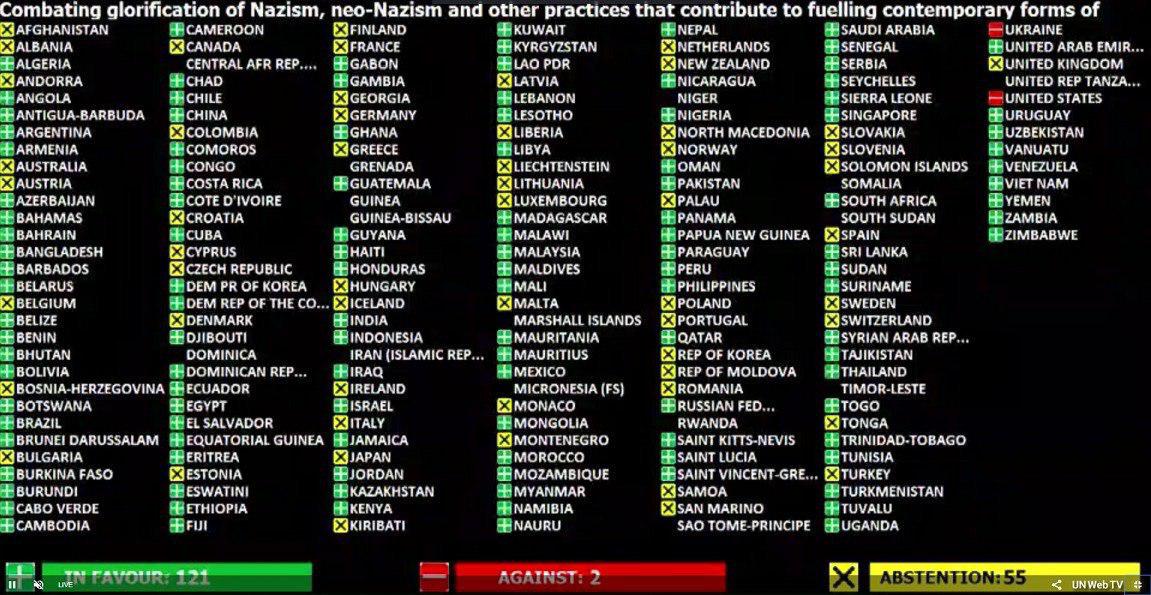 On November 7th, the third committee of the UN General Assembly on social and humanitarian issues adopted by majority vote the Russian draft resolution on the fight against the glorification of Nazism.

There were only two countries that voted against – the United States and Ukraine, and the resolution still passed.

The resolution is titled “Combating glorification of Nazism, neo-Nazism and other practices that contribute to fuelling contemporary forms of racism, racial discrimination, xenophobiea and related intolerance”.

121 states voted in support, 55 abstained and 2 were against.

The resolution recommends that countries take appropriate specific measures, “including in the legislative field and in the field of education, in accordance with their international human rights obligations, in order to prevent the review of the outcome of World War II and the denial of crimes against humanity and war crimes committed During the Second World War.”

The authors of the document strongly condemn the incidents related to the heroization and propaganda of Nazism, and urge states to eliminate all forms of racial discrimination by all appropriate means, including, if circumstances so require, legislatively.

As Rinat Alyautdinov, director of the Russian Foreign Ministry’s Department for Humanitarian Cooperation and Human Rights, told reporters, one of the delegations that voted against the Russian resolution stated during consultations in the preparation of this document that “no one should ever be blamed for cooperation with Nazism.”

“In my opinion, there is nothing more to comment on,” he said.

Answering a clarifying question whether this was the Ukrainian delegation, the diplomat said: “It’s easy to guess.”

At the initiative of Russia and a number of states, including OSCE participants, the UN General Assembly annually adopts a resolution against the glorification of Nazism. Moreover, traditionally only Kiev and Washington oppose this document.

It is more than likely that the US opposes the resolution mostly due to the fact that over the past years, it has openly backed Nazi and neo-Naiz organizations in Eastern Europe, including the conflict in eastern Ukraine.

Why Ukraine opposes such a document is clear to see. Its Prime Minister attends concerts of Neo-Nazis and holds speeches telling them how appreciated they are.

It is acknowledged even by its “true ally” the US as the Nazi hub of the world. The Ukrainian government also wouldn’t want Nazis and “volunteer battalion” members, who are predominantly Nazis to protest in Kiev because their representatives at the UN supported a resolution against their core ideology.