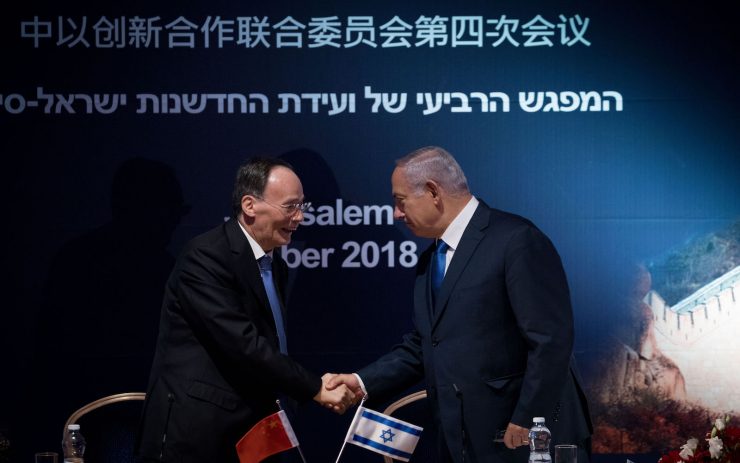 China on Friday assailed the US administration for attacking Beijing’s investments in Israel as a threat, as well for accusing the Asian country of hiding information about the coronavirus and hampering international efforts to clamp down on the disease.

In a statement Friday, China’s embassy in Israel said the accusations were “absurd” and said it hoped its “Jewish friends” in Israel will not only succeed in defeating the virus but also the “political virus” — an apparent reference to accusations leveled at Beijing by US Secretary of State Mike Pompeo during a visit to Israel this week.

The statement also said that “Jewish friends know… well” that historically, “pandemic is accompanied by conspiracies and the dark mentality of seeking scapegoats.”

As Pompeo visited Israel this week for a brief eight-hour stint, State Department officials said a main issue of discussion was Washington’s concerns over Israel’s trade relationship with China, citing its lack of transparency and problematic trade practices.

Senior security officials in both countries have sounded alarm bells over Chinese involvement in infrastructure projects, warning they are a security risk and could jeopardize ties with the US.

The embassy in its statement said Pompeo has long claimed there are security risks in cooperation with China, “without producing any concrete evidence.”

It said Israeli-Chinese cooperation was “win-win in nature,” and it claimed the assertions of a Chinese “buy up” of Israel was ridiculous, as “China’s investment in Israel only accounts for 0.4 percent of China’s investment across the world and 3% of the foreign investment flown into Israel.”

Pompeo last year said dealing with China posed risks because it uses “debt as a trap” and “engages in spying through its commercial state-owned enterprises and presents risk through its technology systems, companies like Huawei,” adding that these “present real risks to the people of Israel.”

In October, under pressure from the US, Israel’s security cabinet announced the formation of a new advisory panel to review foreign investments in the country.

Pompeo and US President Donald Trump have also increasingly blamed China as coronavirus infection and death rates in the US have ballooned, saying it hid information about the outbreak during its initial stages and even claiming there was evidence the virus had been accidentally released from a Chinese lab — though they have provided no corroboration.

The embassy in its statement said Beijing had “never covered up the outbreak,” insisting its doctors and scientists have cooperated with officials around the world in “an open and transparent manner.”

It said the situation in the US, which has become the world’s worst hit country, with nearly 1.5 million cases and 87,000 deaths, “is not caused by China, rather the inaction of a few American politicians who missed the window of opportunity to put the virus under control.”

Beijing said Washington was “shifting blame to China for the inadequate response of someone else,” while asserting it had become the target of a smear campaign.

The embassy even questioned conventional wisdom that the virus originated in China at all — though it is widely believed to have been the source.

“The place that first reported a case [is] often not its origin” in pandemics, it said. “More and more studies are showing that the coronavirus in different places belongs to different strains, and patients zero of many countries do not even have any contact with China.”

A scientific consensus is still evolving, but the leading theory is that “infection among humans began at an animal market in Wuhan, China, probably from an animal that caught the virus from a bat.”

China has been accused of a slow initial response to the outbreak and of hiding information on its scope that may have hindered the global response.

Beijing muffled early warnings, such that the Chinese were assured the risk of sustained human-to-human transmission was low even as infected people entered hospitals across the country and the first case outside China was found, in Thailand.

Trump has turned to blaming China and halting US contributions to the World Health Organization, accusing it of parroting misinformation from Beijing.

Header: Wang Qishan, vice president of China, and Prime Minister Benjamin Netanyahu during the opening of the fourth Israel-China Joint Committee on Innovation Cooperation at the Ministry of Foreign Affairs in Jerusalem, October 24, 2018. (Yonatan Sindel/Flash90)

Original: TOI – Raphael Ahren and AP contributed to this report.