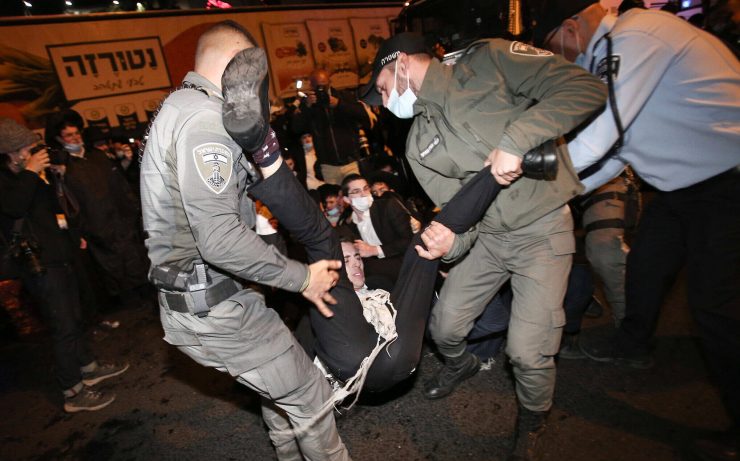 Police said they were looking into video of a female officer punching an ultra-Orthodox man in the head while he was being arrested at a protest Sunday in Bnei Brak.

In the short clip, the man can be seen struggling with cops as he sits on the ground, before the officer punches him in the head several times.

Police said the officer’s conduct was “inappropriate,” according to the Haaretz daily.

“The incident will be investigated and referred to the appropriate authorities,” police said. “This does not diminish the severity of the violent protest that the officers were required to deal with.”

During Sunday’s demonstration, hundreds of members of the hardline Jerusalem Faction blocked the Route 4 highway to protest the arrest of a seminary student for failing to visit a draft office to arrange deferment of his mandatory conscription.

Police arrested 13 protesters for blocking the highway and throwing rocks at officers, one of whom was injured by a stone that hit him in the face.

Some of the protesters called the cops “Nazis,” according to the Ynet news site.

In another video from the protest, three women can be seen kicking an ultra-Orthodox man blocking their car in front of police officers, who ask them to get back in the vehicle.

On Sunday, Channel 13 news interviewed a protester who was beaten by a cop during a demonstration in Jerusalem Saturday evening over the death of a young settler in a West Bank car crash while fleeing police.

“He just gave me murderous blows and I don’t know why. It’s seems like that’s what they sent [the officer] to do, to destroy guys,” Noam Binyamin said. “He kicked me and sent me flying.”

Binyamin, who claimed he didn’t provoke the officer, said he would file a police complaint and a civil lawsuit.

“People like this can’t be in the police,” he said.

Police arrested 21 people during Saturday’s protest outside the national police headquarters in Jerusalem, during which demonstrators blocked roads and the light rail tracks. Police said the protesters also hurled rocks at officers, 11 of whom were injured.

Police said rocks were also thrown at a car, whose passengers the Haaretz daily identified as Arab, as well as at passersby. The police headquarters is located in East Jerusalem, near several Palestinian neighborhoods.

Protests have been held nightly in Jerusalem and elsewhere since the death last week of 16-year-old Ahuvia Sandak in the central West Bank.