Over the past few days, the mainstream press has vigorously pushed back against a theory about the origins of the coronavirus that has now infected as many as 70,000+ people in Wuhan alone (depending on whom you believe). The theory is that China obtained the coronavirus via a Canadian research program, and started molding it into a bioweapon at the Institute of Virology in Wuhan. Politifact pointed the finger at Zero Hedge, in particular, though the story was widely shared across independent-leaning media.

The theory is that the virus, which was developed by infectious disease experts to function as a bio-weapon, originated in the Wuhan-based lab of Dr. Peng Zhou, China’s preeminent researcher of bat immune systems, specifically in how their immune systems adapt to the presence of viruses like coronavirus and other destructive viruses. Somehow, the virus escaped from the lab, and the Hunan fish market where the virus supposedly originated is merely a ruse.

Now, a respected epidemiologist who recently caught flack for claiming in a twitter threat that the virus appeared to be much more contagious than initially believed is pointing out irregularities in the virus’s genome that suggests it might have been genetically engineered for the purposes of a weapon, and not just any weapon but the deadliest one of all.

In “Uncanny similarity of unique inserts in the 2019-nCoV spike protein to HIV-1 gp120 and Gag“, Indian researchers are baffled by segments of the virus’s RNA that have no relation to other coronaviruses like SARS, and instead appear to be closer to HIV. The virus even responds to treatment by HIV medications.

Our phylogentic tree of full-length coronaviruses suggests that 2019-nCoV is closely related to SARS CoV [Fig1]. 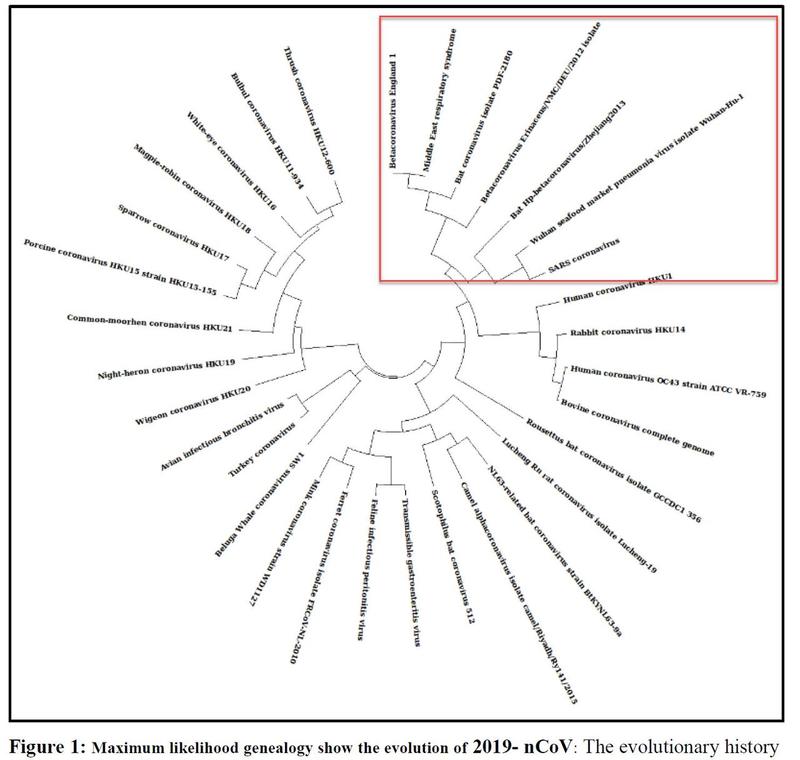 We then translated the aligned genome and found that these inserts are present in all Wuhan 2019-nCoV viruses except the 2019-nCoV virus of Bat as a host [Fig.S4]. Intrigued by the 4 highly conserved inserts unique to 2019-nCoV we wanted to understand their origin. For this purpose, we used the 2019-nCoV local alignment with each insert as query against all virus genomes and considered hits with 100% sequence coverage. Surprisingly, each of the four inserts aligned with short segments of the Human immunodeficiency Virus-1 (HIV-1) proteins. The amino acid positions of the inserts in 2019-nCoV and the corresponding residues in HIV-1 gp120 and HIV-1 Gag are shown in Table 1. 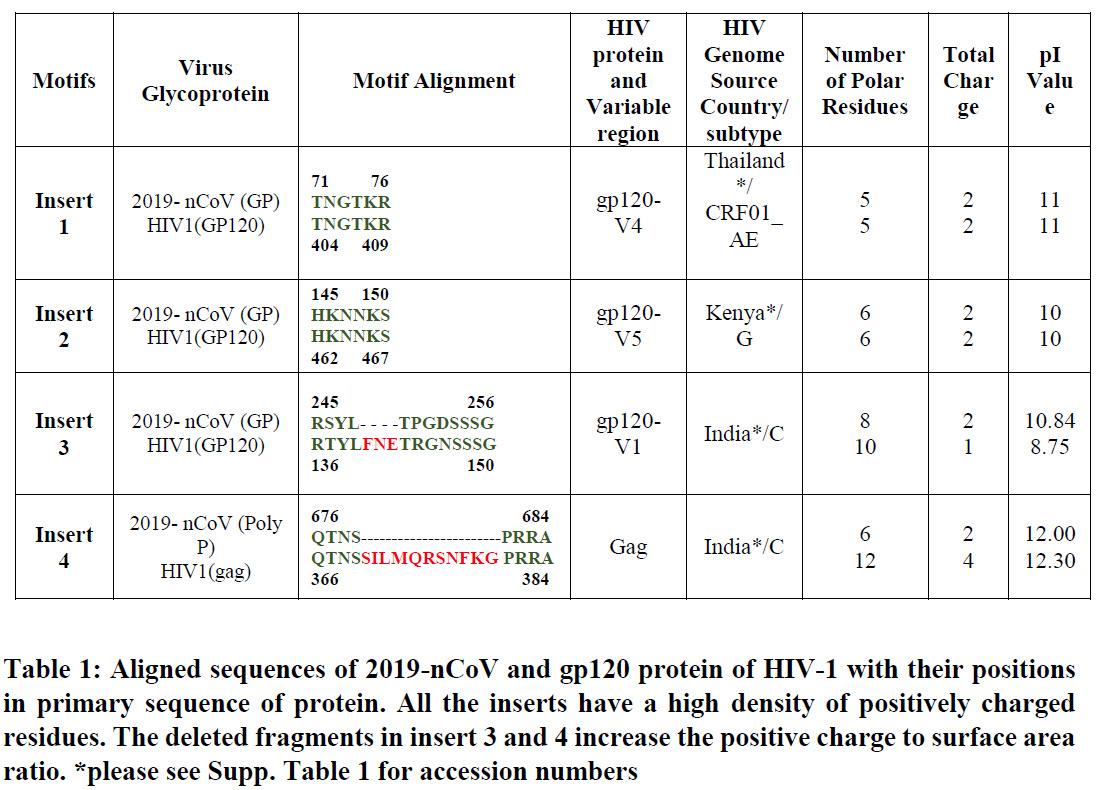 Why do the authors think the virus may be man-made? Because when looking at the above insertions which are not present in any of the closest coronavirus families, “it is quite unlikely for a virus to have acquired such unique insertions naturally in a short duration of time.” Instead, they can be found in cell identification and membrane binding proteins located in the HIV genome.

Since the S protein of 2019-nCoV shares closest ancestry with SARS GZ02, the sequence coding for spike proteins of these two viruses were compared using MultiAlin software. We found four new insertions in the protein of 2019-nCoV- “GTNGTKR” (IS1), “HKNNKS” (IS2), “GDSSSG” (IS3) and “QTNSPRRA” (IS4) (Figure 2). To our surprise, these sequence insertions were not only absent in S protein of SARS but were also not observed in any other member of the Coronaviridae family (Supplementary figure). This is startling as it is quite unlikely for a virus to have acquired such unique insertions naturally in a short duration of time.

The insertions were observed to be present in all the genomic sequences of 2019-nCoV virus available from the recent clinical isolates. To know the source of these insertions in 2019-nCoV a local alignment was done with BLASTp using these insertions as query with all virus genome. Unexpectedly, all the insertions got aligned with Human immunodeficiency Virus-1 (HIV-1). Further analysis revealed that aligned sequences of HIV-1 with 2019-nCoV were derived from surface glycoprotein gp120 (amino acid sequence positions: 404-409, 462-467, 136-150) and from Gag protein (366-384 amino acid) (Table 1). Gag protein of HIV is involved in host membrane binding, packaging of the virus and for the formation of virus-like particles. Gp120 plays crucial role in recognizing the host cell by binding to the primary receptor CD4.This binding induces structural rearrangements in GP120, creating a high affinity binding site for a chemokine co-receptor like CXCR4 and/or CCR5.

And some visuals, which lead the paper authors to conclude that “this structural change might have also increased the range of host cells that 2019-nCoV can infect”.

3D modelling of the protein structure displayed that these insertions are present at the binding site of 2019-nCoV. Due to the presence of gp120 motifs in 2019-nCoV spike glycoprotein at its binding domain, we propose that these motif insertions could have provided an enhanced affinity towards host cell receptors. Further, this structural change might have also increased the range of host cells that 2019-nCoV can infect. To the best of our knowledge, the function of these motifs is still not clear in HIV and need to be explored. The exchange of genetic material among the viruses is well known and such critical exchange highlights the risk and the need to investigate the relations between seemingly unrelated virus families.

A good recap of the findings was provided by Dr. Feigl-Ding, who started his explanatory thread by pointing out that the transmission rate outside China has surpassed the rate inside China.

A graph is worth a thousand letters. #coronavirus. Source: NYTimes https://www.nytimes.com/interactive/2020/world/asia/china-coronavirus-contain.html … 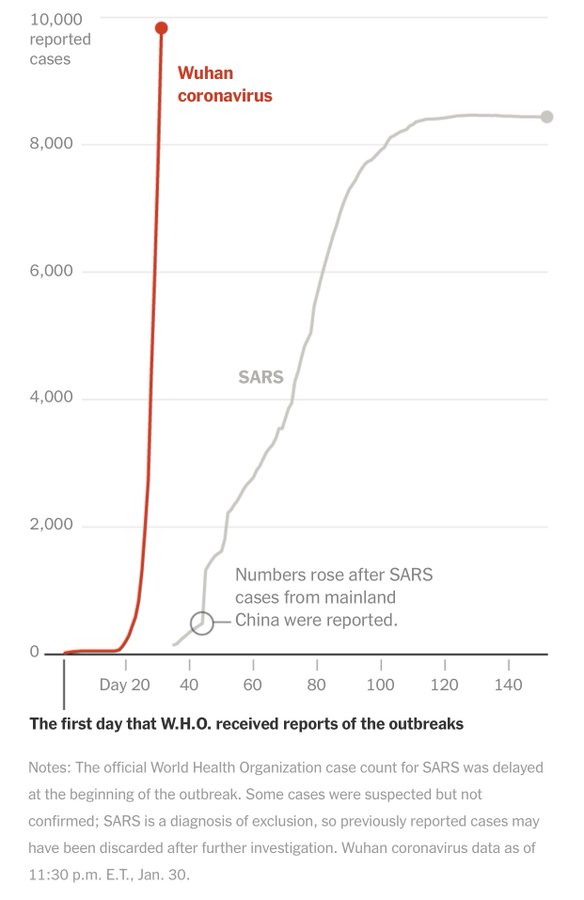 Whoa- the rate of increase ***outside of China*** is steeper than inside of China or Wuhan! Figure 1A. From: @TheLancet “Nowcasting and forecasting the potential domestic and international spread of 2019-nCoV http://bit.ly/2GF6gZP ”

“An estimated 75815 individuals have been infected in Wuhan” —> this is substantially higher than current reports or ~10k reports by China media. (75k estimate from above Lancet article.

…”On the present trajectory, 2019-nCoV could be about to become a global epidemic in the absence of mitigation…substantial, even draconian measures that limit population mobility should be seriously and immediately considered in affected areas…”

But the ‘smoking gun’ in this case are pieces of the virus’s genetic code that Indian researchers, led by Prashant Pradhan at the Indian Institute of Technology, found may have been ’embedded’ from HIV, which belongs to an entirely different family of viruses.

…WHOA- the authors said the finding was “Unexpectedly” related to genes from HIV virus. Notably there were 4 gene insertions (see figure in above post #16). And so, which HIV gene proteins were found in the new #coronarvirus? Gag protein and Gp120- key HIV proteins…

“Gag protein of HIV is involved in host membrane binding, packaging of the virus and for the formation of virus-like particles. Gp120 plays crucial role in recognizing the host cell by binding to the primary receptor CD4”

Again, these are new express published findings and not peer reviewed yet. Let’s not draw conclusions yet. But evidence suggest that 2 different HIV genes are present in the #coronarvirus S gene region (that didn’t map to any other coronavirus, according to other studies).

Paper piles on: “these insertions are present at binding site of 2019-nCoV. Due to presence of gp120 motifs in 2019-nCoV spike glycoprotein at its binding domain, we propose that these motif insertions could have provided an enhanced affinity towards host cell receptors.”

The authors dunked this final conclusion: “This uncanny similarity of novel inserts in the 2019- nCoV spike protein to HIV-1 gp120 and Gag is unlikely to be fortuitous”. Wow, they sure just went straight there!

BOTTOMLINE: 1) Seafood market not the source. 2) This RNA #coronavirus mutates really fast. 3) Has unusual middle segment never seen before in any coronavirus. 4) Not from recent mixing. 5) That mystery middle segment encodes protein responsible for entry into host cells.

To be sure, Dr. Feigl-Ding insists that he’s not trying to promote any ‘conspiracies’ about the virus being a bioweapon developed by the Chinese, although it is difficult to find a proper name for what appears to be an artificial, weaponized virus.

TO BE CLEAR: ”I am absolutely not saying it’s bioengineering, nor am I supporting any conspiracy theories with no evidence. I’m simply saying scientists need to do more research + get more data. And finding the origin of the virus is an important research priority.”

2019-nCoV is a +ve strand RNA virus that enters human cell and first encodes its RNA-replicase to make -ve stranded RNA that serves a template to make +ve strand RNA that is then translated for daughter nCoV. Drugs Lopinavir and Remdesivir target its protease and replicase.

…until he realized something disturbing.

Oh my god. Indian scientists have just found HIV (AIDS) virus-like insertions in the 2019-nCov virus that are not found in any other coronavirus. They hint at the possibility that this Chinese virus was designed [“not fortuitous’]. Scary if true. https://t.co/h6xPX1gYvj pic.twitter.com/kCpd1I00uE

The impetus to ask the question if the disease originated at the Wuhan Institute of Virology is especially relevant in light of social media reports such as this one which claims to “have evidence here that the outbreak originated from Wuhan P4 Research Institute. You need to find a truly patriotic journalist to publish it to the public. You can personally trust me to provide a complete chain of evidence. Thank you.”

The chairman of Bloomberg L.P. said in a speech here on Thursday that the company should have reconsidered articles that deviated from its core of coverage of business news, because they jeopardized the huge sales potential for its products in the Chinese market.

Bloomberg, the financial data and news company, relies on sales of its terminals, which are ubiquitous on bankers’ desks around the world, for about 82 percent of its $8.5 billion in revenue.

Some current and former Bloomberg journalists, who spoke on condition of anonymity, said they had hoped the controversy surrounding Bloomberg’s China reporting would prompt the company to reaffirm its support for investigative efforts. Mr. Grauer’s comments were met with dismay, particularly because he is regarded as close to Mr. Bloomberg and would be unlikely to voice views that were not broadly accepted at the top of the company.

Unlike Bloomberg, or anyone else in the mainstream media, we don’t plan on “rethinking” any of our articles just to curry favor with the powerful and we certainly will continue our own “investigative efforts”, even if it means we lose some of our inbound traffic.