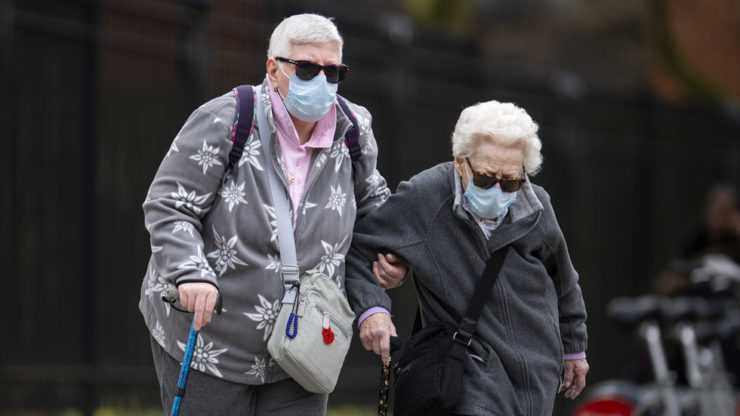 The scenario is terrifying all over Europe.

More than half of coronavirus victims in Belgium died in nursing homes. “Belgian society has decided that the lives of these confined elders are far less important than the so-called ‘active’ lives”, sociologist Geoffrey Pleyers wrote in Le Soir. Marcus de Brún, appointed by the Irish Ministry of Health to the Medical Council, also explained: “Confining Covid-negative residents within Covid-positive Nursing Homes, is tantamount to state sanctioned Euthanasia”.

There is a country, Sweden, which seems to have made this decision most brutally and today finds itself with the highest per capita number of victims dead from Covid-19 in the world. Sweden, with 10 million inhabitants, is the only Western country that has not imposed a lockdown.

“We have failed to protect the most vulnerable, the elderly, despite our best intentions,” admitted Prime Minister Stefan Löfven.

It is more than that.

“We were told that we should not send anyone to the hospital, even if they are 65 years old and have many years to live. They told us not to send them”, Latifa Löfvenberg, a nurse who worked in several nursing homes in Gävle, north of Stockholm, told BBC.

Löfvenberg currently works in a Covid-19 ward in a large hospital in the Swedish capital, where she says that the patient demographics data provides further evidence that the elderly are being kept out. “We don’t have many seniors. They are many young people born in the 90s, 80s and 70s”.

“Professor of geriatrics: ‘This is active euthanasia’”, headlines Dagens Nyheter, the most prestigious Swedish newspaper. Yngve Gustafson believes that many older people are not treated for Covid-19, directly receiving palliative medicine.

“Living in a nursing home is not a diagnosis. By itself it can never be a medical basis for deciding whether to live or die”.

“Instead, giving morphine and midazolam regularly to elderly people with lung infection is active euthanasia, if not something worse. We gave up the elderly who could have had a chance of survival”.

Another doctor and researcher at the university hospital of Karolinska says that in Sweden “euthanasia is being practiced more and more in the guise of palliative care”. The Facebook group “Everyone has the right to oxygen!” was created to protest this treatment.

As I explained here many times before, there seems to be something sinister at work in Europe: a death cult and death wish.

The elderly are just one aspect of what Europe would like to get rid of. There are also disabled people of all kinds, not to mention unwanted children. We often talk about the elimination by the Nazis of the crippled and mentally retarded, of the “lives unworthy of being lived” (Lebensunwertes Leben). The Nordic countries do this because they are traditionally “advanced”. The Spaniards want to do this because they are considered backward and make it a point of honor to overcome it frantically. Belgium not only allows it for incurable seniors, but also to teenagers and people with Alzheimer.

A case was just discussed in the Netherlands. When a woman was diagnosed with Alzheimer’s, she had made a biological testament to receive euthanasia “when I think it is the right time”. Then she entered into a nursing home for mentally ill. One day, she was sedated with a cup of coffee and given the first of three injections. She awoke and squirmed, perhaps she has thought better of it, and the doctor, helped by her daughter, immobilized her and continued with the deadly treatment. A few minutes and it was over.

Is euthanasia lawful for the mentally ill without their renewed consent? The High Court of the Netherlands has ruled yes. Dutch judges have ruled that the life of a psychiatric patient can be stopped even if the patient can no longer clearly express his or her will. Isn’t that a form of death wish?

“Never before have we expressed with such a calm face that everyone’s life does not have the same value”, French writer Michel Houellebecq has just written with regard to Covid-19.

I greatly fear the West, which obsessively talks about rights, feelings, tolerance and any kind of transgenderism, but at the first massive existential challenge, has put to death so many of our fathers and grandfathers.