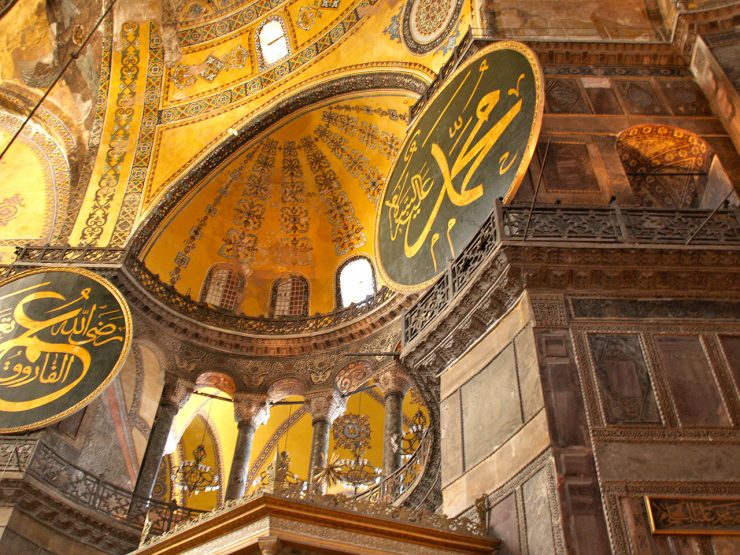 Turkey has built 13,000 mosques since Erdogan came to power.

The largest mosque in the world stands on the hill of Camlica, dominating the Asian side of Istanbul.

Unsatisfied, the Turkish President just inaugurated a new mega mosque in Taksim Square in Istanbul, realizing the ambition to build a Muslim place of worship in the main public space of the city, which had become a symbol of the modern secular Turkish Republic.

Erdogan joined thousands of worshipers for the first prayers at the towering 3,000-seat mosque in Taksim, which was also the site of mass anti-government protests in 2013.

“The Taksim Mosque was brought to our Istanbul after a struggle of nearly a century and a half,” Erdogan said after Friday prayers, insisting that plans for the mosque date back to a Russo-Turkish war in 1877-1878.

It is the third symbolic mosque that Erdogan inaugurated in Istanbul, after Camlica and having converted the Hagia Sophia into a mosque.

In 1997, Turkish military leaders had lobbied an Islamist-led government – to which Erdogan belonged – for undermining secular laws, citing plans to build a mosque in Taksim.

“For years, since my childhood, they said we couldn’t do it,” Erdogan said. “But Allah has destined us for this”.

He believes that Allah is on his side.

He wants to export Islam wherever he has power, from the capital of the European Union (the Great Mosque under construction in Strasbourg) to the Armenian mountains, from the Sahel desert to what remains of secular Turkey.

Post-Christian Europe must understand this hegemonic project before it is too late.

The investigation by the National Catholic Register, the oldest American Catholic newspaper, gives one the chills. It starts with the funding voted by the Strasbourg city council of 2.5 million euros for the construction of a mosque led by the Islamist movement Millî Görüş in Strasbourg.

It will be the largest mosque in Europe.

“The controversy is all the more controversial because the position and size of the mosque have a strong symbolic dimension,” writes the journalist, Solène Tadié.

“In fact, Strasbourg, seat of the Council of Europe and one of the three ‘capitals of Europe’ with Brussels and Luxembourg, is also home to the emblematic medieval cathedral of Our Lady, one of the tallest churches in the world. The Ottoman architecture of the mosque, with its imposing minarets, will leave an indelible mark on the landscape of this elevated place of Western Christian culture ”.

Erbakan, in a speech in Ludwigsburg, Germany, said that “Europeans are sick. … We will give them the medicine. The whole of Europe will become Islamic. We will conquer Rome ”.

The Turkish confederation claims over 514 mosques across Europe, including the new mosque under construction in Milan.

Its infiltration capacity is such that a study of kindergartens in Vienna revealed that Millî Gorus has ties to many of the capital’s kindergartens.

Turkey expert Ralph Ghadban warns that the Islam that is preached in Europe in Turkish-controlled mosques is “very observant of Sharia law and with strong Turkish-nationalistic tones”, such as to require a “clear separation from the individualistic values ​​of the West. “.

According to the Federal Office for the Protection of the Constitution in Germany, the second largest Islamist movement in Germany is Millî Görüş, strongly opposed to Muslim integration into European society:

“The movement believes that a ‘just’ political order is founded on a ‘divine revelation’, while those systems developed by men are ‘in vain’.

At this moment the ‘vain’ Western civilization is dominant. This ‘vain’ system must be replaced by a ‘just order’ based solely on Islamic principles. To do this, Muslims must adopt a certain vision (Görüş) of the world, that is, the national-religious vision (‘Milli’), a ‘Millî Görüş’ “.

The National Catholic Register spoke to Joachim Veliocas, an analyst at the Center des Etudes du Moyen-Orient in Paris, who said that the construction of the Strasbourg mosque is part of the “birth of a Turkish counter-society in Strasbourg”.

A design made possible only by the permissiveness of local authorities, according to Veliocas, who wrote a book on clientelism practiced by politicians of all parties to buy votes by distributing public funds. “They do everything in their power to appease Muslims”, Veliocas said, “even the most radical Muslims, in order to consolidate this electorate, often raising the issue of non-discrimination”, which consists in conceding to Islam the same space as Christianity ”.

Cardinal Barbarin, for example, published a press release in defense of the Institute of Muslim civilization in Lyon, subsidized by the municipality.

Yet, we know that it is led by supporters of Tariq Ramadan and was inaugurated by the secretary general of the Muslim World League, Muhammad Al-Issa, who in his doctoral thesis prescribed the murder of apostates! ”.

Europe does not take their words seriously – yet. Not even when Erdogan says: “Mosques are our barracks, domes our helmets, minarets our bayonets and the faithful our soldiers…”.

It will pay dearly for its appeasement.