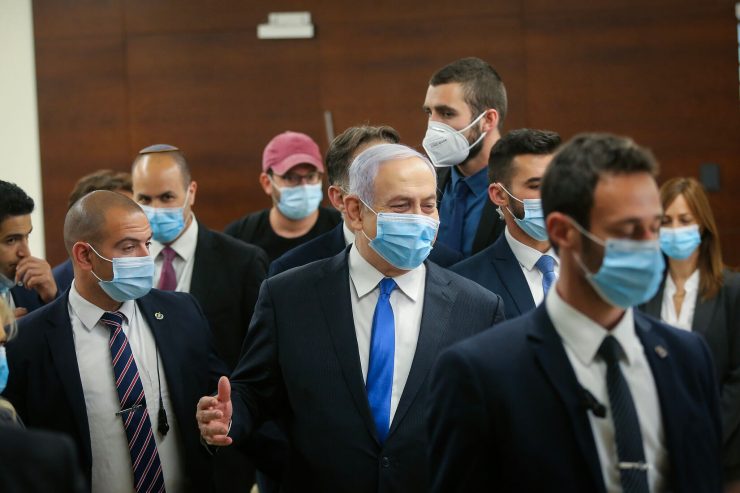 Jerusalem District Court judge Rivka Friedman-Feldman will preside over the historic trial in which Netanyahu faces a single bribery charge as well as three counts each of fraud and breach of trust in three separate affairs.

Friedman-Feldman will lead a panel of judges that will also include Moshe Bar-Am and Oded Shaham.

In 2015, Friedman-Feldman was on a panel that overturned a previous acquittal of Olmert and convicted him of fraud, aggravated fraud and breach of trust.

Olmert had been accused of accepting envelopes full of cash from American businessman and fundraiser Morris Talansky in exchange for favors.

Though he was initially cleared of the charges in 2012, his former secretary Shula Zaken later came forward with testimony that led prosecutors to retry the case.

In her ruling, Friedman-Feldman wrote that even without Zaken’s testimony, there had been sufficient evidence to convict Olmert in the original trial.

He was sentenced to 8 months in jail in the case, though he had already been sentenced to six years — later reduced to 18 months on appeal — for his role in the Holyland real estate bribery scheme. He was later sentenced to another month in prison for witness tampering.

In the end Olmert, who stepped down before the start of the trials, served 16 months, becoming the first former prime minister to go to prison. He was released in 2017.

In 2001, Friedman-Feldman was also one of three judges who found former defense minister Yitzhak Mordechai guilty of sexually assaulting and harassing two women.

He was cleared of similar charges brought by a third woman, citing inconsistencies in her testimony. But the judges stressed this should not be interpreted as a repudiation of the woman’s claim.

He was handed an 18-month suspended sentence.

Another judge on the panel slated to hear Netanyahu’s case, Shaham, was on a bench that in 2010 cleared MK Tzachi Hanegbi of corruption charges when he was serving as environmental protection minister. He was found guilty of perjury and fined NIS 10,000 ($2,920).

Hanegbi was at the time a member of the Kadima party, but has since returned to Likud, where he is considered close to Netanyahu and now serves as a minister without portfolio.

In 2018, Bar-Am and Friedman-Feldman were on a panel of judges who cleared a man of murder charges and released him from prison after he had already served 4.5 years behind bars.

The judges found there were problems with the manner in which police obtained confessions from the man as well as in the testimonies of witnesses in the case.

The prime minister has repeatedly denied any wrongdoing in all three cases.

On Wednesday the court rejected Netanyahu’s request to skip the start of his corruption trial, requiring him to appear for the opening hearing Sunday.

Concerning his claim that his presence at the May 24 hearing was unnecessary as the indictment against him is read out, the judges said it was necessary he be present to confirm he understands the charges against him.

They also dismissed his assertion that the large number of security guards accompanying him would violate Health Ministry guidelines limiting the number of people in a courtroom, as part of measures to contain the coronavirus. The judges said they had already taken his security detail into account when considering who would be allowed into the hearing.

In Case 1000, involving accusations that Netanyahu received gifts and benefits from billionaire benefactors including Israeli-born Hollywood producer Arnon Milchan in exchange for favors, Attorney General Avichai Mandelblit charged Netanyahu with fraud and breach of trust — the latter being a somewhat murkily defined offense relating to an official violating the trust the public has placed in him.

In Case 2000, involving accusations Netanyahu agreed with Yedioth Ahronoth newspaper publisher Arnon Mozes to weaken the circulation of a rival daily in return for more favorable coverage from Yedioth, Mandelblit charged the premier with fraud and breach of trust, while Mozes will be charged with bribery.

In Case 4000, widely seen as the most serious against the premier, Netanyahu stands accused of having advanced regulatory decisions that benefited Shaul Elovitch, the controlling shareholder in the Bezeq telecom giant, in exchange for positive coverage from the Elovitch-owned Walla news site. In that case Mandelblit is charging Netanyahu and Elovitch with bribery.

Header: Prime Minister Benjamin Netanyahu pictured after presenting the 35th government of Israel to the Knesset, May 17, 2020. (Alex Kolomoisky/POOL)