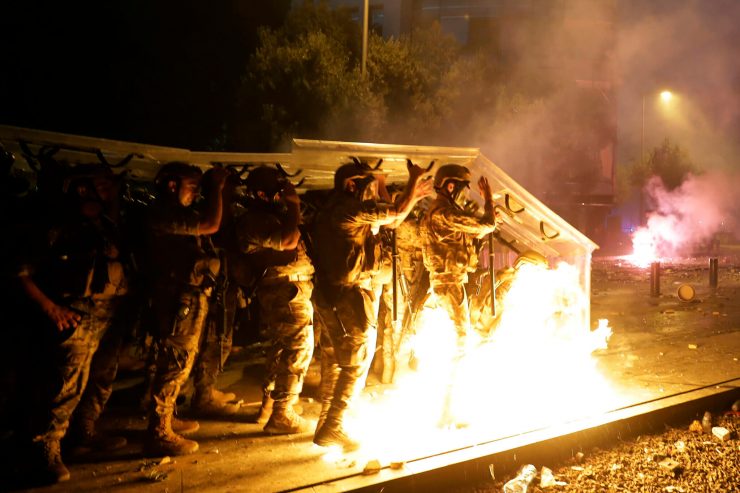 Public fury over this week’s massive explosion in Beirut took a new turn Saturday night as protesters stormed government institutions and clashed for hours with security forces, who responded with heavy volleys of tear gas and rubber bullets.

One police officer was killed and over 200 people were hurt in the confrontations, which played out in streets that were wrecked from Tuesday’s blast at the port that devastated much of the city and killed nearly 160 people. Dozens were still missing and nearly 6,000 people injured.

The explosion that ripped through Beirut this week handed a resurgent protest movement an unexpected and brief victory Saturday, almost literally breaking down the doors of the foreign ministry.

The famed imperial staircase at the ministry’s entrance was packed with some 200 demonstrators and retired army officers, who called the ministry the new headquarters of their uprising — before soldiers arrived three hours later to force everybody out.

Some brandished nooses in a display of seething anger over a deadly Tuesday blast that killed more than 150 people and wounded at least 6,000.

The explosion that disfigured the city and shocked the world is widely perceived as a direct consequence of the incompetence and corruption that have come to define Lebanon’s ruling class.

At first, “there were about 100 of us,” said Tony Kayrouz, one of a group of retired army officers who led the takeover.

“There were a few policemen manning the gate, they opened it, and we entered, there were no scuffles,” Kayrouz told AFP.

The retired army officers were led by a former general who once answered to President Michel Aoun, when he was the country’s military chief in the 1980’s.

“I had hope in Aoun,” the general said, but now, “this republic is run like a farm.”

Rammah and retired army officers have been a mainstay of a protest movement that started in October to demand the removal of a political class deemed inept and corrupt.

Many are boiling in anger over the country’s economic woes, which include the collapse of the Lebanese pound that has devalued their pensions.

“Our pensions are now worth 20 or 40 dollars (a month), while deputies and the ministers eat away at the country,” one retired soldier said.

“The people must reclaim what is theirs.”

‘Capital of the revolution’

Demonstrators at the ministry unfurled a banner that covered the entire facade of the building.

“Beirut, capital of the revolution,” it read.

“Congratulations, we have reclaimed the ministry,” rejoiced one protester.

Beneath elegant wall engravings, protesters pulled Aoun’s portrait off the wall and smashed it on the ground, where it was repeatedly stepped on.

Portraits of every top diplomat that ever headed the ministry were arranged on a wall cracked by the blast, but one former foreign minister was missing: Gebran Bassil, Aoun’s son-in-law and head of the Free Patriotic Movement, founded by the president.

Bassil was one of the main targets of October’s protest movement and has since become a highly reviled figure among activists and demonstrators.

It was not clear if his picture was dislodged by the blast or removed by protesters who stormed the foreign ministry on Saturday.

Visitors relished the takeover, posing behind a pulpit usually used for diplomatic press conferences. Others wandered into conference rooms and offices, where they snapped selfies.

“This is where Gebran Bassil once sat,” scoffed one protester, pointing to a stylish sofa lacking an armrest.

“Isn’t there any other ministry we could storm?” quipped another, as groups raided the nearby ministries of energy and the economy.

But the foreign ministry takeover was cut short when a large army reinforcement muscled in, forcing everyone out.

Dozens of protesters stormed the buildings of government ministries and the headquarters of the banking association, turning their rage to state and financial institutions.

Separate groups of protesters also stormed the economy ministry, the Association of Banks in Lebanon and the energy ministry before being forced out by the army shortly afterwards.

The latter is the focus of particular anger from the population, which has in recent months been subjected to worse than ever power cuts due to the de facto bankruptcy of the state.

“They ruled Lebanon for 30 years, now Lebanon is ours,” said one protester speaking on live Lebanese television broadcasts.

“We entered the energy ministry and we are here to stay. They will be surprised by our actions,” he said, referring to the ruling political class protesters want to remove.

The Association of Banks in Lebanon, also an obvious target for protesters who have routinely nicknamed their rulers “the government of banks,” was ransacked, an AFP reporter said.

By 10:30 pm (1930GMT) however, protesters had been dispersed and security forces deployed across the city, where the broken glass and rubble from Tuesday’s disaster mixed with the smoking remains of a night of rage.

Dozens of people wounded during the violence also needed treatment in hospitals already bursting with the injured from Tuesday’s mega-blast and coronavirus patients.

Under increased pressure from the street, which wants heads to roll over the Beirut port tragedy, and foreign partners exasperated by the leadership’s inability to enact reforms, Diab’s government was fraying at the edges.

A bloc of three MPs from an opposition Christian party resigned from parliament Saturday, bringing to five the number of lawmakers to quit since the August 4 explosion.

The protesters also fanned out to enter the economy and energy ministries, some walking away with documents claiming they will reveal the extent of corruption that permeates the government. Some also entered the environment ministry.

Many protesters said they now had only their homes and even those are no longer safe. They blamed the government’s inefficiency and political division for the country ills, including the recent disaster that hit almost every home.

The violence unfolded on the eve of an international conference co-hosted by French President Emmanuel Macron and United Nations Secretary-General Antonio Guterres aimed at bringing donors together to supply emergency aid and equipment to the Lebanese population.

In a televised speech Saturday evening, Prime Minister Hassan Diab said the only solution was to hold early elections, which he planned to propose in a draft bill.

He called on all political parties to put aside their disagreements and said he was prepared to stay in the post for two months to allow time for politicians to work on structural reforms.

The offer is unlikely to soothe the escalating fury on the street.

At least 238 people were hurt in the clashes, and 63 of them needed to be taken to the hospital, according to the Red Cross. Several protesters were carried away with blood running down their faces. At one point, gunfire could be heard, but its source was not immediately clear.

The country’s ruling class, made up mostly of former civil war-era leaders, is blamed for incompetence and mismanagement that contributed to Tuesday’s explosion.

“The current leaders’ bloodline needs to end. We want the death of the old Lebanon and the birth of a new one,” said Tarek, a 23-year-old university student who had prepared a mix of water and paint in a bottle to throw at the police. No peaceful protest would bring about change, he said.

The U.S embassy in Beirut tweeted that “the Lebanese people have suffered too much and deserve to have leaders who listen to them and change course to respond to popular demands for transparency and accountability.”

Documents that surfaced after the blast showed that officials had been repeatedly warned for years that the presence of 2,750 tons of ammonium nitrate at the port posed a grave danger, but no one acted to remove it. Officials have been blaming one another, and 19 people have been detained, including the port’s chief, the head of Lebanon’s customs department and his predecessor.

The protests came as senior officials from the Middle East and Europe visited in a show of solidarity with the tiny country that is still in shock.

The president of the European Council, Charles Michel, arrived in Beirut for a brief visit. Turkey’s vice president and the country’s foreign minister met Aoun and said that Ankara was ready to help rebuild Beirut’s port and evacuate some of the wounded to Turkey for treatment.

At the site of the blast, workers continued searching for dozens of missing people.

When he visited the blast site on Thursday, French President Emmanuel Macron warned that the billions of dollars in available aid would not be forthcoming if the Lebanese state did not implement deep changes.

Crippled by debt and the local currency’s nosedive, threatened by a spike in COVID-19 cases, Lebanon can ill-afford international isolation, but its hereditary ruling class is digging its heels in.

On the eve of an international donor conference organised by Macron for disaster-stricken Lebanon, many have urged foreign powers not to funnel more money into thieving and incompetent hands.

“We call on all the anguished Lebanese people to take to the streets to demand the prosecution of all the corrupt,” said Sami Rammah, the retired general who spearheaded the short-lived occupation of the foreign ministry Saturday.

Near the massive crater caused by Tuesday’s explosion, whose shockwave was felt on the island of Cyprus, teams of Lebanese and foreign rescuers were digging through the rubble in an 11-hour push to find survivors.

According to the health ministry, at least 158 people were killed and 6,000 were wounded by the blast, which in a few seconds levelled the port and sowed as much destruction in some areas as 15 years of civil war had done a generation ago.

Syrian authorities said over 40 Syrians were among the dead, though it was unclear if they were part of the Lebanese health ministry’s tally.

The Netherlands also announced that its ambassador’s wife had died on Saturday of injuries sustained in the blast.

Header: Molotov cocktails are hurled at Lebanese soldiers by anti-government protesters during a protest against the political elites and the government after this week’s deadly explosion at Beirut port which devastated large parts of the capital in Beirut, Lebanon, Saturday, Aug. 8, 2020. (AP Photo/Hassan Ammar)