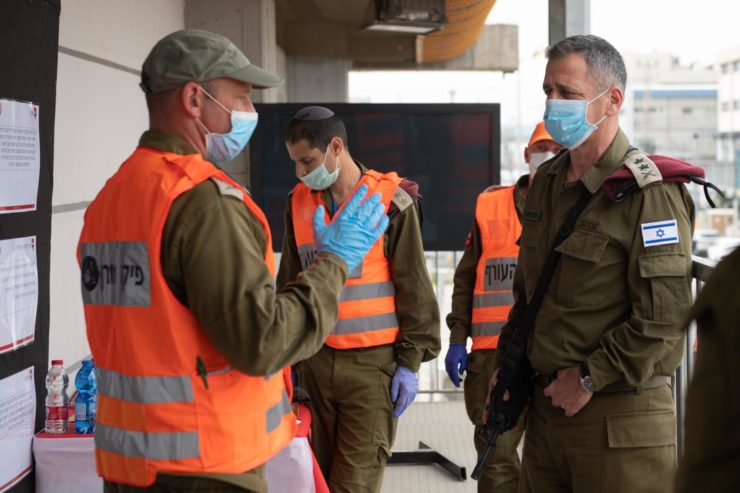 IDF Chief of Staff Aviv Kohavi visited the ultra-Orthodox city of Bnei Brak on Sunday, where hundreds of soldiers were helping distribute food and other necessities to residents of the Tel Aviv suburb, one of the country’s hardest hit areas in the coronavirus pandemic.

In recent days, troops from the military’s Home Front Command have been providing civil assistance to the city, as police enforced a lockdown of the area, operating checkpoints at the entrances and exits.

“The phrase ‘people’s army’ takes on a different importance in light of IDF soldiers performing this life-saving mission. It is an expression of reciprocal responsibility for the people of Israel. We will continue to increase our assistance to local government, to anywhere needed, widely and quickly. I am proud of your action,” Kohavi said during his visit to the area.

The army chief, who was released from self-quarantine over the weekend, met with the commander of the 98th Division, Brig. Gen. Yaron Finkleman, and other officers. He also observed some of the food distribution operations and heard about the unit’s plans for future activities, the military said.

Defense Minister Naftali Bennett also visited Sunday, praising the military for having delivered some 12,000 warm meals to Bnei Brak’s elderly population, to those receiving welfare support and to people who are otherwise unable to leave their apartments.

“The IDF and Home Front Command are prepared to operate in any city where they are needed. This warms the heart. Together we will overcome to the coronavirus,” Bennett said.

The city of Bnei Brak, with its roughly 200,000 residents, has one of Israel’s largest outbreaks of the coronavirus with 1,214 confirmed cases as of Sunday morning — nearly as many as Jerusalem, which has the largest tally according to Health Ministry data from Sunday. Bnei Brak is one-fifth the size of the capital.

Thousands more people in the city are thought to possibly have the disease but remain untested, either due to medical authorities’ inability to do so or out of individuals’ fears of being quarantined.

Many in the ultra-Orthodox community initially dismissed social distancing regulations, which officials say has led to the high rate of infection.

The disease has claimed the lives of at least 47 people in Israel as of Sunday evening, with over 8,000 people confirmed to be carriers of the virus.

On Friday, the military was formally tasked with providing assistance to the city — not enforcing the lockdown, which would remain the authority of the police. The IDF’s effort has so far largely consisted of supporting the Magen David Adom ambulance service, assisting in evacuations of coronavirus patients and providing food and other necessities to Bnei Brak residents, particularly the elderly.

The deployment of the IDF — an organization that does not have wide support among the country’s Haredi population — inside the ultra-Orthodox city was a dramatic move, which some feared could result in direct clashes between the military and residents. Though some ultra-Orthodox politicians railed against the IDF operation — including Deputy Education Minister Meir Porush in a radio interview on Sunday — others inside the community warmly embraced the troops, given them food and well-wishes. Soldiers too were seen distributing candy to Bnei Brak’s children.

The road, also known as Jabotinsky Street and normally one of the country’s most congested thoroughfares, was closed off between the Geha Interchange and Ben Gurion Junction in Ramat Gan.

The military was also preparing to help residents prepare for this week’s Passover holiday, setting up sites to burn leavened products in accordance with Jewish law and delivering the specialty foods needed to observe the festival.

Officials also announced that public transportation leading into or out of the city was being cut off, though some buses would continue to run inside the city.

Within the city, residents under the same restrictions as in the rest of the country, allowing them to shop for food and medicine themselves. Drone footage filmed by the Haaretz daily in the city shows largely deserted streets, with a small number of buses, cars and some foot traffic.

The future of the Bnei Brak closure was not entirely clear as of Sunday, with some officials pushing for large-scale evacuations, while others argued in favor of more aggressive testing to better map and contain the spread of the disease within the city.

The head of the IDF Home Front Command, Maj. Gen. Tamir Yadai, said over the weekend that attempts to remove some of the ill to quarantine hotels were not going very well, noting that some families had eight or 10 children that needed to be cared for. “The efforts are ongoing but it’s not a rousing success so far,” he said.

Maj. Gen. (res.) Roni Numa, who has been tasked with leading Bnei Brak’s coronavirus task force, told the Israel Hayom daily that a proposed plan to remove the city’s elderly population and put them in a Defense Ministry-run hotel was not feasible as it was more likely to spread the disease than actually protect that vulnerable population.

Bnei Brak’s closure will initially last for seven days, with the option to be extended by ministers by five days at a time. Numa anticipated it to last several weeks.

Though Bnei Brak is the first Israeli city to face a closure, it is not expected to be the last, with Elad, Migdal Ha’emek and ultra-Orthodox neighborhoods of Jerusalem identified as possible locations.

Header: IDF Chief of Staff Aviv Kohavi visits the city of Bnei Brak in central Israel, which is largely closed off from the rest of the country due to a coronavirus outbreak, on April 5, 2020. (Israel Defense Forces)