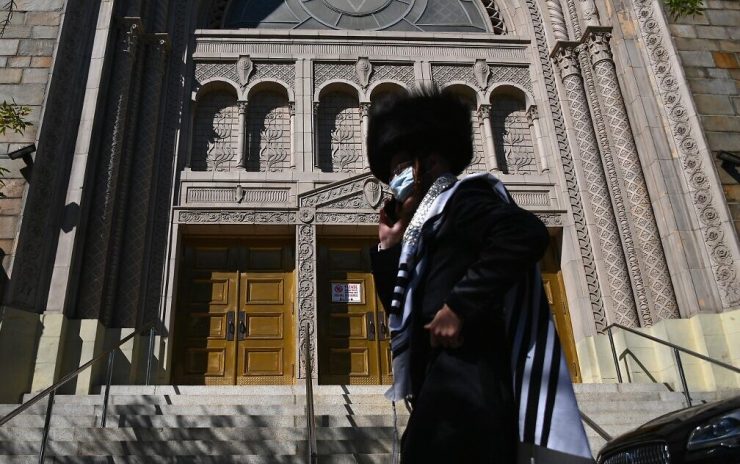 In an ultra-Orthodox Jewish area of Brooklyn on Friday, community members vowed to defy government attempts to restrict their worship over rising coronavirus concerns as they marked a religious holiday [Simchat Torah].

Borough Park saw angry protests by Hasidic Jews this week after New York Governor Andrew Cuomo announced he was partially shutting down the neighborhood to stem a second wave of COVID-19.

The controversy turned political with right-wing figures stoking the demonstrations and Orthodox Jews claiming they are being targeted by the Democratic governor for their support of US President Donald Trump.

On the final day of Sukkot Friday, which coincided with Cuomo’s deadline for religious sites to be capped at ten people and non-essential businesses to close, worshippers were defiant.

“He doesn’t understand that our whole life is praying and studying the bible. We have to do what we have to do,” said grey-haired Moses, declining to give his surname outside the Anshei Sfard Hasidic synagogue.

A few blocks away on 13th Avenue, where demonstrators lit fires and chanted “Jewish Lives Matter” on Tuesday night, 50-year-old Abraham said the community would keep open religious schools and places of worship.

“What’s he (Cuomo) going to do? Is he going to bring his sheriffs down and close every synagogue? There are maybe 500 here,” he said, also declining to give his full name.

Borough Park is part of a large area of Brooklyn declared a “red zone” by Cuomo, and backed by Mayor Bill de Blasio, after the rate of positive cases soared above the three percent threshold.

Citywide on Thursday, the rate of positive tests was 1.16 percent but in a Borough Park zip code 8.7% of tests came back positive, according to government statistics.

Many of the neighborhoods recording high rates include large Orthodox Jewish communities, where residents recently celebrated the Rosh Hashanah and Yom Kippur holidays.

Cuomo said the targeted shutdowns are necessary to stop the virus spreading, blaming the surge on a let-up in social distancing.

He and de Blasio insist the shutdowns are based on data and science but Orthodox Jews say they are being unfairly discriminated against.

“As always they are picking the easy target, which is the Jew,” 40-year-old Jacob Fuchs said, accusing Cuomo of fostering anti-Semitism.

“We didn’t go to parties like they did in New Jersey and play beach ball together,” said Josef, an elderly Hasidic Jew who declined to give his surname.

Borough Park residents believe there is a main reason they are being targeted — their politics.

“Ninety percent of people here vote for Trump and that is exactly where the red zone is. They are trying to stop us from voting,” said a middle-aged man who declined to give his name.

Instrumental in this week’s demonstrations has been right-wing radio host and city council candidate Heshy Tischler.

He addressed protesters and called for flags emblazoned with “Cuomo Hates Jews” and “Cuomo Killed Thousands,” a reference to the approximately 33,000 people in New York state who died from COVID-19.

On Friday, he posted a video on Twitter saying he expected to be arrested on Monday for inciting violence after a Jewish reporter covering the protests was attacked.

Cuomo accused Trump’s campaign of “fomenting the ultra-Orthodox in Brooklyn.”

“Some of those people will die. What’s the Trump campaign saying? Play politics. It’s disgusting,” he said Friday.

Later, a New York federal judge ruled that Cuomo’s partial lockdown was lawful, dismissing a claim from Orthodox Jewish organizations that it violated the free exercise of their religion.

Back in Borough Park, the vast majority of non-essential businesses appeared to be obeying the governor’s orders to stay closed. However, AFP saw two municipal inspectors shut a lingerie shop.

Most residents wore masks as they walked between wooden festival shelters erected for the autumn harvest celebration and their homes, carrying palm fronds to commemorate the 40 years Israelites spent walking the desert after the Exodus from slavery in Egypt.

Those not wearing masks were offered them by city-commissioned volunteers.

Header: A Hasidic Jew walks past a closed synagogue in the Borough Park section of Brooklyn, one of the five boroughs of New York City, on October 9, 2020. (Angela Weiss/AFP)