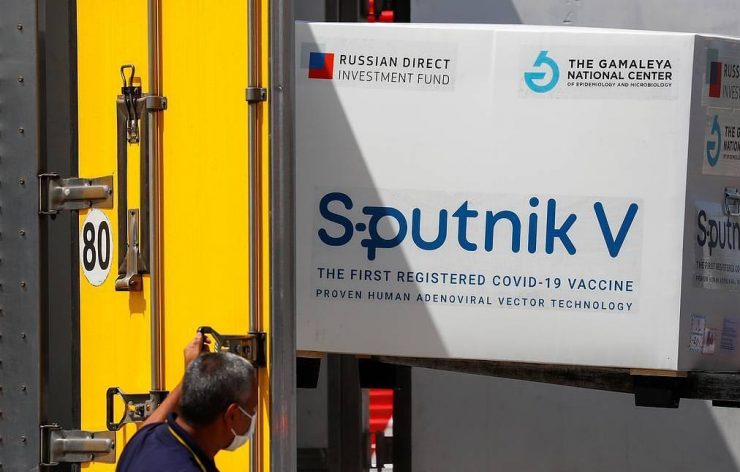 Israel is said to have agreed to purchase an unknown number of Russia’s Sputnik V COVID-19 vaccine doses for use in Syria as part of the deal for the return of an Israeli woman who was held by the Syrian regime after crossing the border two weeks ago.

The woman arrived in Israel on Friday via Moscow and was being debriefed this weekend by the Shin Bet security agency.

According to a report (Arabic) in the London-based Asharq Al-Awsat on Saturday, Israel is funding the purchase of Sputnik V doses for Damascus as part of the prisoner exchange deal with the Assad regime.

The Ynet news site reported Saturday that Israel’s purchase of the vaccine doses was to the tune of over a million dollars.

Reports of the existence of an unpublished part of the agreement circulated widely in Israeli media, but the details were barred from publication by the military censor.

Knesset member Ahmad Tibi has hinted that it relates to vaccination doses; MKs are not bound by the censor.

Asharq Al-Awsat reported Saturday that “informed sources” in Israel confirmed the existence of the “secret clause.”

The Assad regime, for its part, denied the report, saying in a statement released by the state-run SANA news agency Saturday that the publication of these details was part of an “attempt to paint Israel as a humane country.”

The release of the young woman was secured in recent days after over a week of diplomatic wrangling, and she landed at Ben Gurion International Airport on a flight from Russia in the early hours of Friday morning.

A report by Channel 13 News said the woman, a Modi’in Illit resident who suffers from “personal problems,” was being treated gently and not being questioned aggressively over her crossing of the border into Syria earlier this month.

The Shin Bet debriefing of the woman, whose name has not been released for publication, was expected to continue all weekend, the Channel 13 report said.

On February 2, the Israeli woman crossed the border into Syria in the foothills of Mount Hermon, an area where there is minimal fencing and spotty surveillance camera coverage. It was not immediately clear how the 25-year-old woman, who reportedly speaks fluent Arabic, knew that this location was a good spot to cross. The military said it was investigating the incident.

After crossing into Syria overnight February 2-3, she entered the Druze village of Khader, where she was captured on suspicion of being a spy and handed over to Syrian intelligence.

However, according to Channel 13, authorities quickly realized she was not a spy of any kind, but simply a civilian with personal issues.

Damascus told Russia of the matter, and Moscow passed along the information to Israel, prompting negotiations to get her back.

According to Channel 12 this week, censorship of the secret clause was a direct result of a Russian demand as part of the deal it mediated.

The network said Israel had attempted Friday to convince Moscow to remove the shroud of secrecy over the matter, but had been refused.

Reporters for Channels 12 and 13 said Friday they believed the secrecy surrounding the step was leading it to take on far greater public significance than was truly justified.

Knesset member Tibi responded to the controversy from his Twitter account: “Last week, I raised in the Knesset a demand to allow the entrance of thousands of vaccines to Gaza and to provide vaccines to Palestinians in the West Bank from the large inventory that Israel has (which is the responsibility of an occupying force). Did I need to wait for a Jewish wo/man to cross into Gaza so that [Palestinians] could get a vaccine?” Tibi wrote.

The woman’s crossing was not her first time attempting to cross Israel’s borders. According to Israeli authorities, she had twice tried to enter the Hamas-ruled Gaza Strip — once by land and once on a makeshift raft — and once attempted to cross into Jordan.

All three times she was captured by either the military or the police.

On Friday afternoon, Prime Minister Benjamin Netanyahu spoke with the young woman’s mother, who thanked him for the efforts to free her from captivity, according to a statement from the premier’s office.

Netanyahu gave her his well-wishes and said Israel would always act to return captive citizens.

Defense Minister Benny Gantz said in a video statement on Friday, after the woman’s return: “Roughly two weeks ago, we received information about an Israeli civilian woman being held by Syrian security forces. She crossed to the Syrian side of her own volition and by herself — an incident that we will be investigating.

“We immediately began working to bring her back. We clarified to the other side that she was a civilian and that this was a humanitarian issue and not a security one. We held conversations with the senior-most Russian officials, our counterparts. I spoke personally with the Russian defense minister, whom I’d like to thank for his involvement and for the assistance from the Russian government in the effort to return her home,” Gantz said.

In addition to the classified aspect of the agreement, Israel initially agreed to concessions regarding two prisoners — Nihal al-Maqt and Dhiyab Qahmuz — both from the Druze community of the Golan Heights, who largely remained loyal to Damascus after the area was captured by Israel in 1967 and effectively annexed in 1981.

As the incident unfolded, Russia had pushed for Israel to scale back its airstrikes on Iran-linked sites in Syria — ongoing attacks that both Damascus and Moscow oppose, the former because its air defenses are regularly targeted during these operations as they fire on Israeli jets and the latter because it interferes with Russian efforts to stabilize and rebuild the war-torn country. But this request appears to have been rejected, as evident by the Syrian reports of Israeli strikes in the country over the past two weeks.

Al-Maqt had been imprisoned for incitement since 2017, and Qahmuz was sentenced to 16 years in prison in 2018 for plotting a terror bombing in coordination with the Lebanese Hezbollah terror group.

Al-Maqt told Syrian Al-Ikhbariya TV on Wednesday afternoon that she had been released from house arrest.

However, Qahmuz, who was due to have his sentence reduced and then be sent to Syria as part of the exchange, refused to be deported.

As a result, his case was removed from the agreement and instead Israel agreed to release two Syrians who crossed the border into Israel this month, ostensibly as they were herding their flocks.

The Israel Defense Forces believes that Hezbollah and other Iran-backed groups use local shepherds as scouts to conduct reconnaissance missions along the border with plausible deniability.

The Syrian shepherds were handed over to the Red Cross at the Quneitra crossing into Syria on Thursday, the IDF said, in a move that was ordered by the government. Syria’s SANA news agency confirmed the swap, identifying the “Syrian prisoners” as Mohamed Hussein and Tarek al-Obeidan.

Accompanying the woman on the flight were Asher Hayun, a staffer for Netanyahu, Yaron Blum, government coordinator for negotiating the return of POWs and MIAs, representatives of the National Security Council and a doctor who checked the woman’s health.