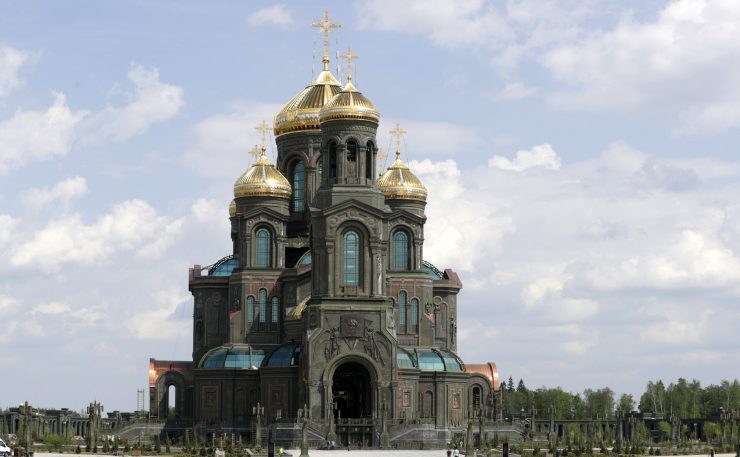 This week saw the opening of Russia’s newest public buildings, the Main Cathedral of the Russian Armed Forces, Moscow. It is a grand statement of Vladimir Putin’s vision of what is most important in Russia: Russian Orthodox faith, national pride and the armed services. It was consecrated on June 14 and opened to the public on Monday, June 22.

The huge cathedral (which can accommodate up to 6,000 people and has six gilded domes) is dedicated to the glory and memory of the armed services, and cost around six billion rubles ($86 million).

Steps are made of steel from captured Nazi tanks. The colour schemes of stained-glass windows replicate those of military decorations.

The architecture and interior design (with its extensive use of gilding and iconography) makes the cathedral very clearly Eastern Orthodox, with no concessions to modernist taste. The height of the cross on the main dome is 95 meters above ground level. It is located in a forest on the outskirts of Moscow and contains extensive symmetrical landscape features echoing the traditional layout of a church.

The cathedral itself is not adorned with mosaic murals of Stalin and Putin, as had initially been planned. After leaked photographs of the incomplete work drew criticism, the mosaics were removed.

A nearby visitor center houses a state-of-the-art museum of the role of the military in Russia and the USSR. Audio-visual displays, dioramas, models and original material (including weapons, munitions, uniforms and servicemen’s letters) are featured.

Two issues have drawn particular comment: the cause and the style.

At a time when the West is becoming increasingly reticent about its military strength – holding fewer military parades and running recruitment drives emphasising humanitarian relief work rather than soldiering (with lackluster results) – President Putin has asserted that Russia’s military fights and dies for the glory of the nation.

It is inconceivable that a Western state would today erect a cathedral of the character of the Main Cathedral. In Western Europe, the size and prestige of the military is contracting, due to budgetary restrictions and ambivalence about the role of military service. In Russia – at least according to the government line – the military is still at the heart of the nation.

The architecture is Russian Revival, using aspects of the Romanov style and traditional Russian Orthodox ecclesiastical design. The opulent decoration and detailing marks a decisive rejection of USSR-era functionalism (The Stalin-era saw a brief, limited return to historical styles, which can still be seen today in the Moscow Metro). It is defiantly not postmodern (the prevailing international style) and this can be read as a sign of an attachment to the native Russian form of architecture, particularly in church design. Amalgams of tradition and innovations – such as LED lighting and areas of glass ceilings in the new cathedral – are dismissed as “pastiche” and “inauthentic.”

As an assertion of confidence and clarity, the project is impressive. How accurately the project reflects social, economic and geo-political conditions of contemporary Russia is for each of us – and history – to judge. Not having visited the cathedral, I am not in a position to say how well the building works architecturally. Whatever one’s personal taste, the cathedral will become a touchstone for how we view this era of Russian history (favorably or otherwise).

For those of us who are unlikely to visit Moscow, the reception of the cathedral reflects back at us the question “So what will the architecture of your society tell history?” In the West, we maintain our historic cathedrals and build art museums as new sites of sacred contemplation. Our most expensive buildings are airports and super bridges, which must eventually be replaced. Are we content to allow our message to posterity to be that of shopping malls and airports?

Our cities are dominated by hotels and office towers built by foreign architectural firms in an international style, funded by multinational corporations, which are not designed to last more than 50 years. It is common knowledge that many firms build mediocre, unoriginal buildings deliberately so that they will not become listed buildings of national interest. It is more convenient for owners to demolish ageing buildings than to maintain them.

Our urban structures are postmodern designs meant to be clever rather than serious; they are essentially interchangeable. The office towers of Shanghai, Qatar, London and Lagos could be swapped and we would barely notice the difference. Like, love or loathe the Main Cathedral of the Russian Armed Forces, it is a unique building in a specific location serving a constituency and it is intended to last. The architects have some faith that this building belongs somewhere rather than anywhere. How history treats it, we cannot yet tell.

Header: Cathedral of the Resurrection of Christ in the Patriot park © Mikhail Metzel/TASS

Vladimir Putin has marked the 79th anniversary of Operation Barbarossa – Nazi Germany’s invasion of the Soviet Union – with a visit to the new Orthodox cathedral built for Russia’s armed forces in Kubinka, outside Moscow.

Monday morning’s event emphasized the close connection between church and state in contemporary Russia. June 22 is an important memorial day, as the USSR sustained around five million military casualties in the five months that followed the surprise German attack. In total, an estimated 27 million Soviet citizens died in the conflict, the majority Russian. Putin said that the memory of World War Two (also known as the ‘Great Patriotic War’) for the people of Russia is “absolutely sacred.”

The president was accompanied by his defense minister, Sergey Shoigu, and Patriarch Kirill of Moscow. He took a tour of the cathedral, which was consecrated on June 14, and participated in a prayer service. The Cathedral of the Resurrection of Christ and the ‘Road of Remembrance’ museum complex are located at the ‘Patriot Park’ facility, around 55km to the west of central Moscow.

“For us, the citizens of Russia, the memory of the Great Patriotic War, of all those who fought and died, who brought victory closer, by all means, is absolutely sacred,” Putin said. “It is always with us. It gives us the strength to serve our country.”

He asserted that the modern generation of soldiers and officers remains faithful to the traditions of the past, and they perform their duties professionally. “We know that the state’s defense and security are reliably ensured,” the president added.

Services in the place of worship have already begun, but visitor numbers are limited due to the Covid-19 pandemic.

The Resurrection of Christ Cathedral of Russia’s Armed Forces was built on donations to commemorate the 75th anniversary of the Soviet Union’s victory in the Great Patriotic War (the Eastern Front during WWII where Russia fought against Nazi Germany). The consecration ceremony was held on June 14.

The cathedral bell tower stands at a height of 75 meters. The Road of Memory gallery’s 1,418 meters are designed to commemorate all the days fought by the Soviet Union in World War Two. The central dome drum is 19.45 meters in diameter. The cathedral’s vaults are stained-glass images of the military decorations awarded throughout Russia’s history. The Icon of the Savior, Image Not-Made-By-Hands, placed in the central dome is the largest mosaic image of Jesus Christ.