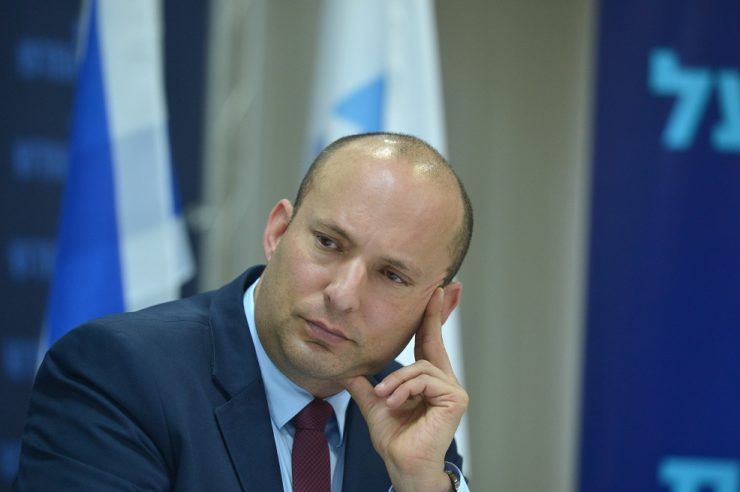 With all the asterisks and warning signs that must accompany the very tight exit polls, it appears as though Naftali Bennett, despite all his declarations and signatures, faces the most significant decision of his political career – and in Israel’s history.

If the real results remain close to the numbers predicted by the pollsters, and that’s a serious IF because each and every Knesset seat moving one way or the other can totally change the picture, then Bennett is the person who can decide on his own to steer the country either to the “full right” or toward a “sane government”; to a government of indictments and Kahanists, headed by a person who in Bennett’s words has failed in his handling of the coronavirus crisis, or to a government of change. Whether to hook up the ventilators to the bygone “brotherly alliance” with Yair Lapid, or surrender to the man he personally despises and who has greatly humiliated him and his family.

We are talking about an inconceivable degree of power in the hands of a person who didn’t even win enough votes for a single Knesset seat in one of the recent rounds of elections, providing further proof of Ariel Sharon’s maxim that the main point in politics is to always stay attached to the wheel.

From many standpoints it’s not surprising that Bennett finds himself cast in the role of kingmaker. Whoever is familiar with his briefings through the years knows how much he always strives, despite his clearly right-wing image, to tread the seam line between the official religious right and the center, so that he might someday head a broad-based government. Thus, when the polls are in his favor he tends to lean toward the wider public with unifying messages, in the style of a friendly counselor from Bnei Akiva with a yarmulke that slides down the back of his head. And when the winds are too stormy around him, he holds fast to the base and steers to the right.

It doesn’t matter what the weather is outside, inside closed rooms it’s always important to Bennett to broadcast to his partners on his left that he’s a “sane rightist.” So important that he preceded Netanyahu in preaching that Arab society must be embraced on the civic level (but never at the nationalist level) – precisely so he would have this independent room to maneuver. He has consistently preferred, and even succeeded at, shaking himself free of the rabbinical component of the parties he has led.

Contrary to the popular psychological analysis that he’s torn between his personal hatred of the Netanyahu family and his inability to go against the right-wing leaders, Bennett is much more strategic than he is emotional.

He wants to succeed Netanyahu whenever the latter leaves office, and not to challenge him when he is so admired by a very large electorate.

“I don’t try to be the prime minister against Netanyahu, but behind him,” he has always said. This approach will now face a fateful test of his own destiny – and of the destiny of us all.

Will the Bennett of officialdom defeat the one who is still building himself up to replace Netanyahu the day after and not a moment sooner, no matter what the moral price comes to?

At the margins, the left is of course breathing a sigh of relief that Meretz and Labor have grown stronger. From many standpoints this is indeed a success but we mustn’t forget the big picture.

There is no chance that the left alone can form any government in the coming years.

The solution is clear to all, and after these elections more than in the past: building a new democratic camp from the ground up, including a real partnership with the Arab community.

Based on the reactions to the drop in voter turnout in that community, it doesn’t appear as though that message has really sunk in. Instead of blaming the Arabs for not turning up in greater numbers to cast their ballots, we must ask what might be done precisely on the part of the center-left to make up for the years of exclusion, incitement, humiliation and tactics meant to weaken them. With all due respect to having won another seat here or there for Meretz and Labor.