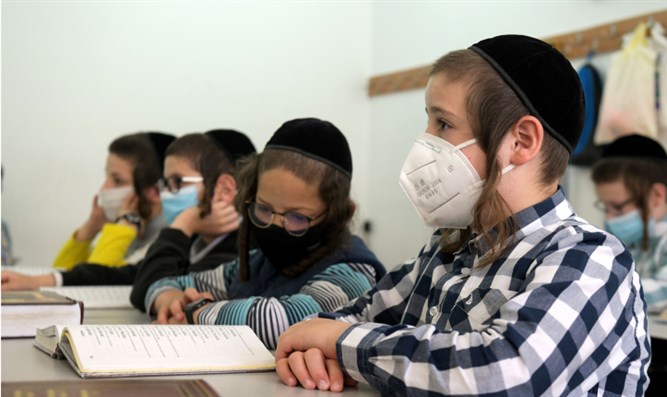 Thanks to the plan for gradually reopening the schools, I discovered I was living in a red neighborhood. Here ends the clear part, which isn’t so clear because apparently there are several kinds of traffic lights – the coronavirus cabinet’s, the Health Ministry’s and the Home Front Command’s – and they don’t always change in unison.

Here’s something else I think I know clearly. On Sunday I’m taking my kid to nursery school for a few hours, or more accurately, to the nursery school’s yard. I try to be grateful for what there is. It’s better than nothing, though I know that returning to nursery school after five weeks is a jittery event for a little girl.

For the time being I stick her in front of a screen, even though I know it’s poisoning her mind and soul, depriving her of her vitality – a fortune every child is blessed with until their world is crushed. In the long run the screen simply depresses her, but I do it so I can work.

I don’t think the government is out to get me or my child, and it doesn’t seem to me that the preschool is closed because Benjamin Netanyahu wants to cancel his corruption trial.

But precisely this approach, which shuns perceived conspiracies, political bias, personal hatreds and automatic classification makes it easy for me to see the absurdity.

Israel’s current plan is complete idiocy. It makes no sense. It’s achievement is the crooked compromise made by various officials pulling in different directions, which in some cases, as in this one, is the worst of all worlds.

What’s the sense of dividing children into groups if every day they meet with the same nursery school teachers and assistants who, even if vaccinated, may be transmitting the disease? Not to mention that the kids meet up in the playgrounds, because you can’t keep children locked up at home for such a long period.

What’s the logic of opening preschools in green, yellow or orange areas when the teachers, assistants and sometimes the children themselves come from red areas? Is there one health professional who wholeheartedly believes that this plan is effective health-wise?

The coronavirus strikes and weakens everyone. Some of the elderly die prematurely, not only from the virus but from loneliness and the existential squalor. People of all ages are being hurt economically and psychologically. My Haaretz colleague Uri Misgav wrote in Hebrew Thursday about the emotional problems of adolescents, the last to return to school.

I want to add pictures from the world of the little ones who have no language to express themselves. Some of them suffer fits of rage, some are wetting the bed again. Some are withering in front of their screens, as their harrowed parents try to survive another day in an impossible trap, trying to remain stable for them, for we are the earth they tread on.

And as always, the weaker parents are hurt most – those who can’t afford a nanny or private lessons for their children, those who must keep their job to survive and choose in full awareness to abandon their children.

The women – who are usually the ones looking after the kids and whose wages are low – are torn from the labor market. A year into this terrible crisis and the state hasn’t found a sliver of a solution for those people.

Among the many coronavirus failures, the school system’s fiasco is one of the worst.

It’s not talked about enough, because it isn’t a matter of life or death and because whoever isn’t currently raising children isn’t experiencing it so directly and painfully.

But this shortcoming will be with us for years to come – how the children and their parents were abandoned during the pandemic, each to his or her fate, a test of one’s personal strength to survive.