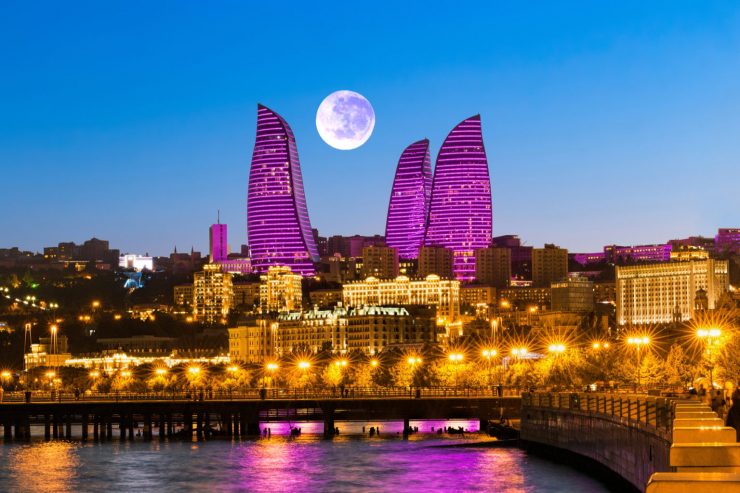 “Israel Hayom claims Azerbaijan supplies about half of Israel’s crude oil supply. But it is not as if Israel cannot purchase oil on the world market without Azerbaijan.” he wrote. Although he mentioned Iran in passing, his article generally highlighted his lack of understanding for the Israeli position.

According to foreign media sources, Iran supports Armenia and Armenia imports arms via Iran. There are reports that Azerbaijan protested against Iranian aid to Armenia along the border. A couple of years ago in a speech in Germany, Israeli Prime Minister Benjamin Netanyahu labeled Iran the “greatest threat to the world,” as it seeks to have Islam rule the entire globe. Iran and its proxies pose an existential threat to the State of Israel. Iran has proxies operating in Yemen, Syria, Lebanon, Iraq, and the Palestinian Authority, who pose a grave strategic threat to the State of Israel. So, when Iran takes a stance in favor of one side, it is only natural that the State of Israel support their opponent. For Israelis, taking a stance against Iran and its proxies matters more than anything else now, aside from fighting against the pandemic.

Traditionally, the Islamic Republic of Iran has had strained relations with Azerbaijan. They do not like the fact that the government in Baku is secular and boasts a strong relationship with the State of Israel. They are also gravely concerned that nearly 40% of the Iranian population is of ethnic Azeri origin. They have always feared that these Azeris could seek to secede from Iran and unite with Azerbaijan. Iran also has a dispute with Azerbaijan over how to share natural resources in the Caspian Sea. All these reasons prompt Iran to back Armenia in its conflict with Azerbaijan.

Recently, the Islamic Republic of Iran shot down an Azerbaijani drone. According to Al Masdar News, “The Iranian defenses shot down the enemy drone while it penetrated the country’s airspace in the northwest part of the country in East Azerbaijan province.” In the coming days, as the conflict escalates, we can potentially expect a greater Iranian role in the conflict if Tehran is not deterred. This will be a strategic blow to the State of Israel, for it will strengthen the Iranian axis in the region, transforming Nagorno-Karabakh into merely another place under the direct influence of Tehran.

Azerbaijan has a 2,500-year-old Jewish community that has benefited from religious tolerance.

In the 1990’s, when Armenia with the backing of Russia invaded the Nagorno-Karabakh region and seven other Azeri districts, their action was heavily criticized in four separate UN Security Council resolutions.

Yisrael Beytenu head Avigdor Liberman expressed support for maintaining Azerbaijan’s territorial integrity, claiming that the Nagorno-Karabakh region was historically and legally part of Azerbaijan: “It is clear on whose side we are on. It is important that we have a friendly state in that location, a Muslim state, modern and secular.”

Azerbaijan borders the Islamic Republic of Iran and sits between what used to be the Persian, Ottoman, and Russian empires, thus making the area extremely vital strategically for the State of Israel. For these reasons, the State of Israel sold weapons to Azerbaijan and should continue to do so, even though Armenia has recently recalled its ambassador over these arms sales.

An Azerbaijani government source claimed: “The Armenians have been attacking many Azerbaijani civilian homes, extremely far away from the frontlines. They have been purposely killing Azerbaijani civilians. In contrast, there is no bloodshed in the territory of Armenia proper. The Azerbaijani Army is not trying to conquer Armenian territory. We merely want to reclaim Nagorno-Karabakh and the seven Azerbaijani districts, which rightfully belong to us according to international law. The world should not call on both sides to stop. They should not tell Azerbaijan to stop because they are kicking invaders out of their homes. There are one million Azerbaijani IDPs and refugees, who have been suffering for 30 years now, after 20 percent of Azerbaijani territory was seized.”

The source added: “The Armenians claim that Turkey has sent Syrian mercenaries to fight here, but it is not true. The only ones who are fighting and dying here on our side are Azerbaijanis, who seek to defend their lands and homes.” Hikmet Hajiyev, an assistant to the Azerbaijani President, denies that Turkey or any of its proxies have been involved in the fighting in these recent clashes, claiming that these were merely rumors spread to aid the Armenian side.

An Azeri source reported that Azerbaijan “liberated 14 villages from Armenia occupation so far.” According to the Azerbaijani unconfirmed source: “In recent days, Armenia has fired more than 10,000 different types of shells and missiles towards densely populated Azerbaijani areas. More than 500 houses were destroyed or severely damaged. The Armenian Armed Forces have used cluster bombs, which are prohibited under international conventions.”

“Azerbaijan has repeatedly stated that it supports a peaceful settlement to the conflict,” the source added. “Yet under Armenian President Nikol Pashinyan, the negotiation process was frozen, and his statements contradict a peaceful solution. Baku’s patience ended with the shootings of civilians along Azerbaijan’s frontline on September 27.”

Azerbaijan’s advance into the Nagorno-Karabakh region comes after clashes intensified between Armenia and Azerbaijan over the past weeks.

Considering this, the State of Israel should be doing its utmost to arm and support Azerbaijan during its critical hour of need. Although there is a pandemic and this puts many projects on hold, our strained economy could use a boost especially now and selling more weapons to Azerbaijan provides such a boost.

Even though there are some in Israel who are reluctant to support Azerbaijan for Erdogan is also doing so, I believe such a position is misguided. Turkey’s cooperation with Azerbaijan is designed to assist their struggle against Armenia and is not aimed against the State of Israel.

So long as Iran is backing Armenia in the Nagorno-Karabakh conflict, there are almost no prospects for improved Armenian-Israeli relations, yet the opportunities for closer Azerbaijani-Israeli ties are as vast as the ocean, especially if Israel gives crucial support. Israel, therefore, should explicitly support Azerbaijan in this conflict.

Rachel Avraham is a political analyst working at the Safadi Center for International Diplomacy, Research, Public Relations, and Human Rights. She is the author of “Women and Jihad: Debating Palestinian Female Suicide Bombings in the American, Israeli and Arab Media.”

Please note: The statements, views and opinions expressed in this column are solely those of the author and do not necessarily represent those of Stiri Internationale.