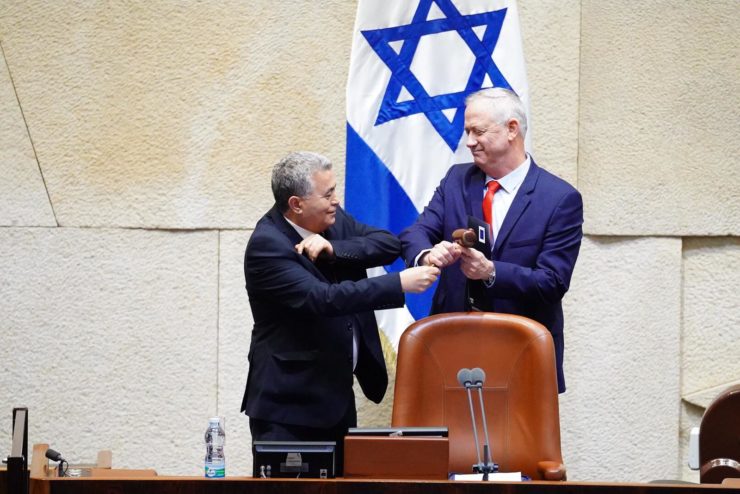 Sources close to Yisrael Beytenu chief Avgidor Liberman said Friday there was “no chance” of Liberman following Benny Gantz in entering Prime Minister Benjamin Netanyahu’s government, even as the former Blue and White leader said he was “at peace” with his unavoidable decision at a time of national crisis.

The sources told several Hebrew media outlets: “Gantz’s entire conduct was askew” since the election. “He hid things and behaved in an amateurish manner.”

There had been some speculation that Liberman could drop his demands for secularist policies and seek to enter the government after Gantz broke up the Blue and White alliance Thursday and indicated he would bring his Israel Resilience party into a unity government with Likud and the religious and right bloc.

Meanwhile, Channel 13 reporter Akiva Novick tweeted Friday that Labor leader Amir Peretz has been calling party activists and telling them to prepare the party base for joining the coalition alongside Gantz.

Channel 12 news reported that the Gesher party’s MK Orly Levy-Abekasis, who broke up her alliance with Labor-Meretz following the election and whose party only has a single seat in the legislature, will also enter the new coalition.

The Blue and White party came together in 2019, formed of three constituent parts: Lapid’s Yesh Atid, which provided much of the party’s infrastructure having already run in several elections, and Gantz’s Israel Resilience and Ya’alon’s Telem, which were newcomers on Israel’s political scene.

Gantz was handed the mandate to form a government earlier this month after three rounds of seemingly inconclusive elections, but appeared to have no clear path to forging a stable coalition. Both he and Netanyahu, who has run Israel for over a decade but is facing criminal charges, had publicly touted the need for a national emergency unity government in light of the coronavirus crisis, but neither had appeared to make any meaningful steps toward that goal before a Wednesday night phone call between the two.

According to reports in recent weeks, Gantz, a political neophyte, had supported compromising to join Netanyahu, but was adamantly opposed by Lapid and Ya’alon, both of whom had previously served as ministers under Netanyahu before falling out with him.

Gabi Ashkenazi, the fourth part of Blue and White’s party’s so-called leadership cockpit, is set to join Gantz in the partnership with Netanyahu, with the two former IDF chiefs reportedly to serve as the foreign and defense ministers.

According to the reported deal taking shape, Gantz is set to partner with Netanyahu in a unity coalition, serving initially as foreign or defense minister and then taking over as prime minister in September 2021, though many political analysts doubt that such a rotation will actually take place.

The Yesh Atid and Telem factions filed a formal request to break away from Gantz’s party late on Thursday afternoon, leaving only Gantz’s Israel Resilience to join forces with Netanyahu’s Likud. Lapid had reportedly told Gantz he preferred that Israel go to fourth elections than see Blue and White partner with Netanyahu.

Gantz is expected to resign the speakership after a unity government is formed, to be replaced by a Likud MK, potentially even the previous Knesset speaker, Yuli Edelstein, who resigned from the position Wednesday in order to avoid having to carry out a Supreme Court order he disagreed with.

Header: Benny Gantz (R) at the Knesset on March 26, 2020, after being elected Knesset speaker. (Knesset)