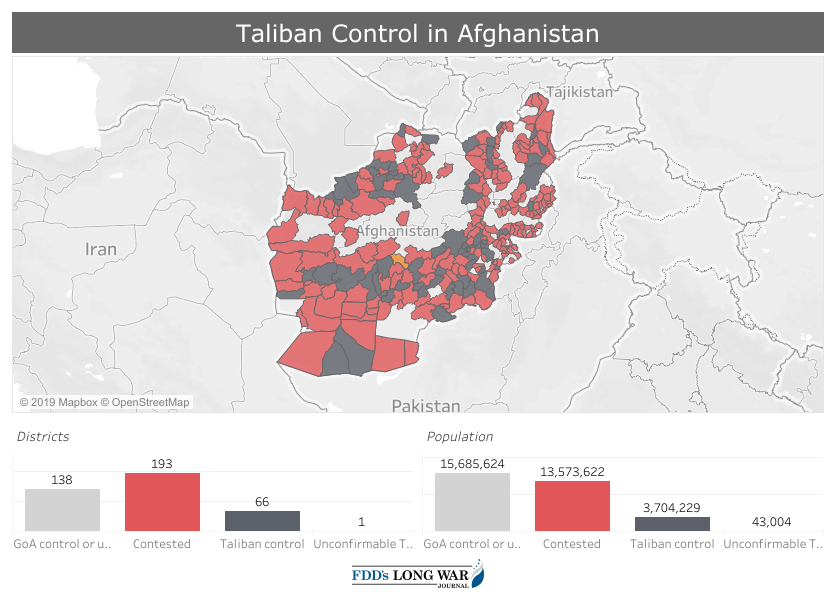 The Taliban has taken over another district in Afghanistan, the second in two weeks, saying that the US will “regret” abandoning key peace talks that stalled after Donald Trump called off a much-awaited meeting with the group.

Yangi Qala, a district in Afghanistan’s northern province of Takhar, fell into the hands of Taliban fighters on Tuesday after government troops retreated over fear of greater casualties, local authorities told the media.

The seizure of the district, which lies close to the border of Russia’s military ally Tajikistan, comes days after the Taliban made another advance by capturing the Anar Darah neighborhood in western Afghanistan.

For nearly two decades the government of Afghanistan, with the help of U.S. and coalition forces, has been battling for control of the country against the ever-present threat of the Afghan Taliban.

FDD’s Long War Journal has been tracking the Taliban’s attempts to gain control of territory since NATO ended its military mission in Afghanistan and switched to an “advise and assist” role in June 2014.

Districts have been retaken (by both sides) only to be lost shortly thereafter, largely resulting in the conflict’s current relative stalemate.

However, since the U.S. draw-down of peak forces in 2011, the Taliban has unquestionably been resurgent.

In recent years, US negotiators held several rounds of low-key talks with the militants in their political office in Doha, Qatar, providing some opening for a possible truce. But it remains to be seen if it could be reached at all, given that the Taliban frequently target local and foreign forces, sometimes taking control of important cities and locations.

Initially decimated in the post-9/11 US airstrikes and the subsequent Western intervention, the Taliban made a resurgence and hit back, gradually expanding influence in the east, west and south of the country.

Now, they control more swathes of land in Afghanistan than at any point since 2001.