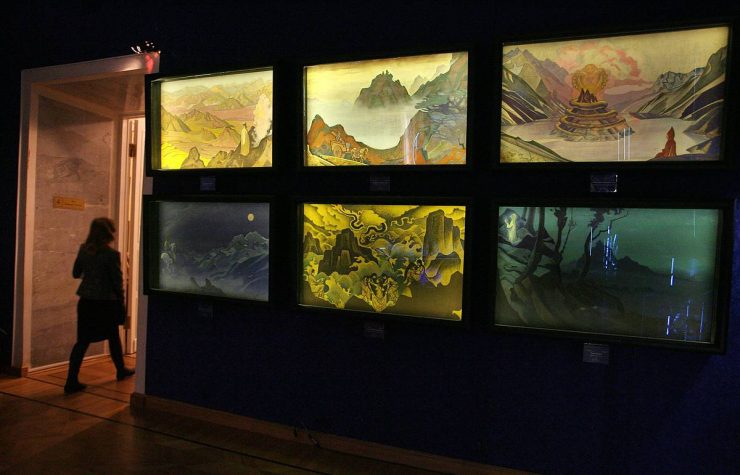 The agreement to exchange renowned artist Nicholas Roerich’s paintings housed in Serbia for the 166th page of the Miroslav Gospel, Serbia’s national treasure, that has been in Russia for a long time, is a major success of the Serbian cultural policy, Serbian Minister of Culture and the Media Vladan Vukosavljevic told TASS Monday.

“Our ministry’s key success in the past four years is undeniably the completion of restauration of two major national museums — National Museum and Museum of Contemporary Art — and the actively applied principle of decentralization of the cultural policy. Our international activity was also deserving of attention — revival of Serbia’s cultural centers around the world, opening of the cultural center in Beijing and plans to launch a cultural center in Moscow, Berlin and other global capitals,” the minister said. “The agreement signed by the Russian and Serbian culture ministers to return the missing page of the ancient Serbian handwritten book, Miroslav Gospel, also has symbolic meaning in the international cooperation sphere. The project is being implemented now.”

Vukosavljevic informed that it is up to the Russian lower house of parliament to greenlight the agreement, which is expected soon, and then the technical exchange will take place.

“Serbia approved this agreement in parliament, the exchange of ratification instruments is coming next. The Russian parliament is yet to pass the agreement but it is already put on the plenary session agenda. We expect this agreement to be greenlighted quickly, in a couple of weeks, and later the conditions for the technical exchange will be laid out, during the upcoming high-level visit. Now it is up to the diplomats of the two countries who will assess when this exchange will have the largest symbolic and political meaning, these are technical details. Meanwhile, we completed the work that laid foundation for such an exchange, the rest is up to diplomats,” the minister noted.

Commenting on the western media attempts to misinterpret the cultural treasure exchange, the minister praised it as a “big event for the culture of the two countries.”

“Many countries, including Serbia, have it when something clever, crucial or good happens, 3, 5 or 7% of people, a part of society, start viciously attacking such an initiative, trying to mar and repudiate it. It is definitely a big and essential agreement for the two countries in the culture sphere, important for Russia and very important for Serbia. It is definitely for that reason that no critics had the courage to come out for debates or a televised duel since their arguments are completely pointless,” he underscored.

The agreement to exchange the treasures was reached by Belgrade and Moscow during Russian President Vladimir Putin’s visit to the Serbian capital on January 17. The agreement itself to hand a page of the medieval Cyrillic manuscript back to Belgrade was inked during then Russian Prime Minister Dmitry Medvedev’s Belgrade visit in October. The document also states that Serbia will hand over seven early Roerich paintings to Russia.

The issue of returning the page from the ancient Cyrillic manuscript to Belgrade had been discussed for decades. As for Roerich’s paintings, they simply vanished in 1941 until in March 2017 a TASS correspondent discovered the masterpieces in Serbia’s National Museum.

Miroslav Gospel was written in approximately 1180. It is Serbia’s oldest manuscript written in Cyrillic, which is housed at the National Museum of Serbia in Belgrade.

In 2005, Miroslav Gospel was added to the UNESCO Memory of the World list. Lately, a new tradition emerged of Serbian presidents swearing in on the gospel’s copy to take the oath of the office when inaugurated.

Written by deacon Gregory, the manuscript was commissioned by Prince Miroslav Zavidovic, a brother of Stefan Nemanja, the founder of the Nemanjic dynasty. Later, the Gospel was named after Prince Miroslav.

In about 1845, Archimandrite Porphyrius (Uspensky) discovered the manuscript at the Hilandar Monastery on Mount Athos.

He extracted one page from it and brought it to Russia.

The fate of Nicholas Roerich’s paintings in question, discovered in the collection of the National Museum of Serbia, remained unknown since the moment Nazi Germany attacked Yugoslavia in April 1941. The seven paintings on the list are Berendej Village (1921), Holy Guests (1923), Church Bells Tolling (1919), Burgustan in Caucasus (1913), St. Sergius of Radonezh (1922), and two costume sketches for Nikolai Rimsky-Korsakov’s opera Snow Maiden (1921). One of the paintings on the list was reportedly Roerich’s gift to the Belgrade Museum. The others had been brought there for a personal exhibition. World War II prevented the exhibits’ return to Russia.

Nicholas Roerich (/ˈrɛrɪk/; October 9, 1874 – December 13, 1947) – known also as Nikolai Konstantinovich Rerikh (Russian: Никола́й Константи́нович Ре́рих) – was a Russian painter, writer, archaeologist, theosophist, philosopher, and public figure, who in his youth was influenced by a movement in Russian society around the spiritual. He was interested in hypnosis and other spiritual practices and his paintings are said to have hypnotic expression.

Born in Saint Petersburg, Russia, to a well-to-do notary public Baltic German father and a Russian mother, Roerich lived in various places around the world until his death in Naggar, Himachal Pradesh, India. Trained as an artist and a lawyer, his main interests were literature, philosophy, archaeology, and especially art. Roerich was a dedicated activist for the cause of preserving art and architecture during times of war. He was nominated several times to the long list for the Nobel Peace Prize.

After leaving Russia, Nikolai Roerich spent a large part of his life in India. He passed away in his Himalayan estate in Naggar, located in the Kullu valley (the state of Himachal Pradesh). The estate now hosts an office of the International Memorial Roerich Trust and a museum storing paintings of Nikolai Roerich and his son Svyatoslav.

It took Nikolai Roerich many years to complete his Himalayas series. He created some of the paintings during his Central Asian expedition which is why these paintings are small in size. These pictures of upland scenery, reflecting not only the real landscape but also the artist’s spiritual experience, are some kind of illustrations for Roerich’s travel diary.