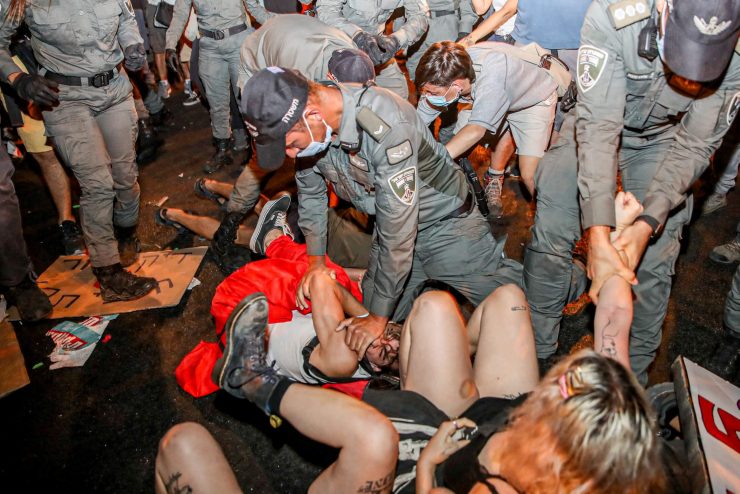 Senior police officers complain that Public Security Minister Amir Ohana is abusing his power to appoint the next police commissioner to undermine the demonstrations outside the prime minister’s residence in Jerusalem.

But even without reading Haaretz’s article Monday on these officers’ complaints, anyone following the news could discern Ohana’s doublespeak. What he says and what he means – and does – are two very different things.

When Ohana says he supports the right to demonstrate, he isn’t talking about the protesters outside the prime minister’s residence on Balfour Street. And all the rest is just a search for pretexts to prevent these demonstrations.

Jerusalem’s police chief called them leftists. This stigmatization is designed to lay the groundwork for treating them differently than other protesters.

It also invites the government’s loyalists to harass them because they’ve been labeled disturbers of the peace and enemies of the state. So it’s no surprise that members of the far-right group La Familia did exactly that, but the public security minister somehow seems incapable of calling them out by name.

Nor is it any wonder that Netanyahu didn’t see fit to denounce the violence against the people protesting against him. And it’s equally unsurprising that the harassment will continue.

It takes infinite chutzpah for Netanyahu and Ohana to call these protesters anarchists when Netanyahu is the arch-anarchist and Ohana has put himself totally at Netanyahu’s service.

The vast majority of the demonstrators, meanwhile, are law-abiding people as removed from anarchy as heaven from earth.

After all, Netanyahu’s libelous accusation that law enforcement officials – police, prosecutors and the attorney general – fabricated cases against him to carry out a coup is the ultimate invitation to anarchy. Because if there’s any truth to his claim, there’s no longer any rule of law in Israel. And if there’s no rule of law, people will eat each other alive.

When Ohana demands that all protesters be treated equally, he means the exact opposite.

What he’s actually demanding is harassment of the anti-Netanyahu protesters. That is, he wants to take the most violent tactics the police have ever used against any unpopular group and use them against the demonstrators on Balfour Street.

That, at least, is how Jerusalem’s police chief understood him.

The officer even sought to reassure his boss that the police were even harsher against the Balfour protesters than other demonstrators when it came to issuing tickets for not wearing masks.

In other words, “equality” means inequality.

A golden opportunity has fallen into Ohana’s lap. He will soon announce to the cabinet his nominee for police commissioner. Thus he has opened a bidding process for senior police officers: Whoever best proves his loyalty to Ohana and the prime minister will get the job.

If that indeed happens, the police commissioner will become a personal and political servant of Ohana and Netanyahu, with disastrous implications for both the police and the public. Who could have confidence in a police force whose leader was chosen that way?

The sorry truth is that these scenarios, which might seem unnatural and delusional, aren’t that at all. Anyone who accepts the prime minister remaining in office while standing trial for serious crimes has also accepted his power to destroy the rule of law. The conclusion is obvious.

After all, it’s clear that the rule of law wasn’t what Netanyahu had in mind when he appointed Ohana, first as justice minister and then as public security minister.

He intended the exact opposite – to destroy the rule of law, insofar as this would serve his personal interests. And Ohana has supplied the goods.

Anyone who accepts the moral stain of an indicted prime minister remaining in office has also invited moral people to demonstrate against this phenomenon.

We must insist on the freedom to demonstrate. It’s a direct continuation of the right to influence the country’s affairs, which is expressed in the supreme right to vote. It guarantees that democracy isn’t a fleeting event – an election every four years – but a permanent situation in which individuals and groups are entitled to make their voices heard, especially via criticism and protest.

There’s nothing like the right to demonstrate to enable every person, even people with no economic power or special influence, to express what they’re upset about and what they want. This is especially necessary during a health-care and economic crisis in which many rights are being violated and many people are on the brink of the abyss. Demonstrations allow the government to know things that are unpleasant for it to hear.

Moreover, the right to demonstrate is actually the last barrier against vandalism and anarchy.

Anyone who deprives proud people of their natural right to raise an outcry is pushing them to break the rules.

It’s very easy to assail the right to demonstrate because it inherently clashes with other rights and interests like the freedom of movement and the general right not be disturbed. If the right to demonstrate doesn’t receive the high status it deserves in a democracy, it can easily be strangled. That’s why it’s so important to insist that it be upheld and not let a deceiver like Ohana undermine it.

Right now, the good ones need to be protected against the minister in charge of the police, who is pressuring them to violate the law and undermine the right to demonstrate.

This is clearly a job for the attorney general and the Knesset.