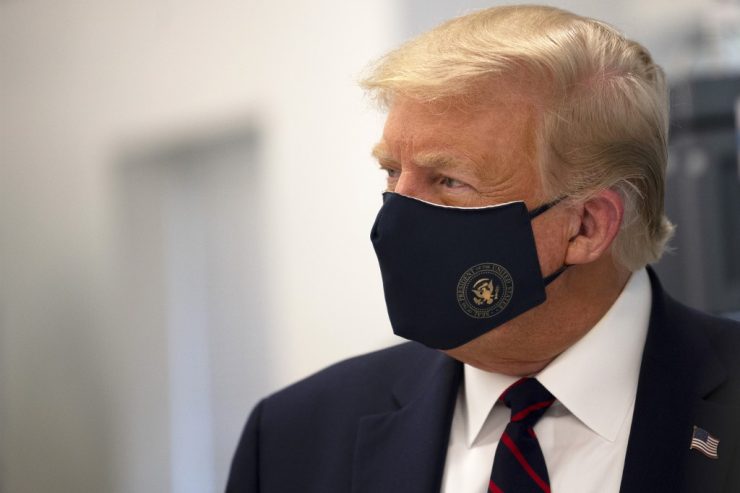 “Now everybody is agreeing that I was right when I very early on called Wuhan as the source of [COVID]-19, sometimes referred to as the China Virus,” Trump posted on his Desk blog on Tuesday.

“To me it was obvious from the beginning but I was badly criticized, as usual. Now they are all saying ‘He was right.’ Thank you!”

The statement seems puzzling on its face, for two reasons. First, because literally none of the media outlets that criticized Trump over the origin of the virus – declaring it a “debunked conspiracy theory” – thanked him or admitted they were at fault in any way. The British tabloid Daily Mail even pointed that out.

Liberal media’s dramatic COVID flip-flop: One year after left-wing news trashed Trump’s theory that the virus originated in a Wuhan lab – suddenly they all now warm to the ideahttps://t.co/mmPmT9Uhdo

Secondly, the Chinese city of Wuhan has been accepted in the US as the source of the virus all along. Insofar as anyone showed any interest in SARS-CoV-2’s origins, however, it was to claim it evolved in animals and somehow jumped to humans in an incident maybe involving the wet market in the city. China has rejected both the lab and the “wet market” origin theories, however.

The actual controversial claim – until recently, that is – was that the virus may have escaped from the Wuhan Institute of Virology. A few weeks back, former New York Times science reporter Nicholas Wade published an essay arguing this was the more likely scenario.

Then Senator Rand Paul (R-Kentucky) asked Dr. Anthony Fauci about “gain-of-function” research funded by the US National Institutes of Health that was conducted in Wuhan. While Fauci tried to split hairs to deny it, the dam burst and all of a sudden the “of COURSE it may have escaped from a lab” was everywhere.

Fauci himself admitted the “possibility” and called for an investigation. Centers for Disease Control and Prevention (CDC) Director Rochelle Walensky told the Senate last week that “Certainly a lab-based origin is one possibility” for the origin of the virus.

Media outlets began quietly editing their articles that categorically rejected the idea back in May 2020 to make it seem otherwise.

The Washington Post’s fact-checker Glenn Kessler was mocked and ratioed for pretending he hadn’t claimed “actual scientists” had said it was “virtually impossible” for the virus to have escaped from a lab. Among those dunking on Kessler was an aide to Senator Ted Cruz (R-Texas).

To borrow a phrase, We deal in facts, and viewers can judge for themselves.

By Tuesday, the narrative had actually shifted to it being Trump’s fault that the corporate media dismissed the lab leak hypothesis originally. That was the actual argument Maggie Haberman of the New York Times made in an appearance on CNN. This is the same Haberman who was considered a valuable asset to “tee up” stories for Hillary Clinton back in 2016, per purloined emails published by WikiLeaks.

NYT’s Maggie Haberman says Wuhan lab leak theory was “made political” by Trump and Pompeo because they “refused to release the evidence” they had seen. pic.twitter.com/jeKfy9K8Gl

Meanwhile, it was Trump’s son Donald Trump Jr. who pointed out that the lab leak hypothesis “literally always made the most sense.”

“I understand the desired narrative media always wanted but didn’t anyone think the most likely scenario was the virus magically originated feet from the lab that worked with it?” he tweeted on Tuesday.

It didn’t “suddenly become credible” it was always credible. It literally always made the most sense. I understand the desired narrative media always wanted but didn’t anyone think the most likely scenario was the virus magically originated feet from the lab that worked with it? https://t.co/XO4Y5OlKLf

For most of 2020, however, the corporate US media insisted that the mere suggestion the virus may have escaped from the lab – even by accident, as Trump and his Secretary of State Mike Pompeo claimed – was a conspiracy theory with zero merit.

Social media suspended or perma-banned users who would bring it up. The only explanation allowed was that the virus evolved naturally in animals and then jumped to humans.

Now that Joe Biden is president and the tone of the media has drastically changed, the lab leak hypothesis is suddenly OK to discuss – but there is no way the media can admit Trump may have been right about anything, ever, including this.