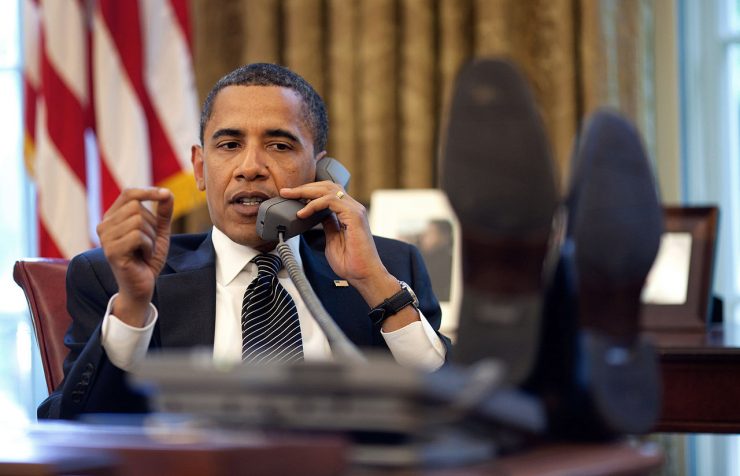 In his new memoir, former US president Barack Obama provides fresh details on his often tense relationships with Prime Minister Benjamin Netanyahu and pro-Israel lobby AIPAC, criticizing them for working to rally domestic opposition to his policies concerning Israel.

In “A Promised Land,” which comes out on Tuesday, Obama describes Netanyahu as “smart, canny, tough and a gifted communicator,” who used his knowledge of American politics and the media to resist administration policies he disagreed with.

Obama writes that Netanyahu’s “vision of himself as the chief defender of the Jewish people against calamity allowed him to justify almost anything that would keep him in power,” according to excerpts from the book published by Jewish Insider.

The 44th US president recalls being told by Rahm Emanuel, his first chief of staff, as he took office that “you don’t get progress on peace when the American president and the Israeli prime minister come from different political backgrounds.”

Obama says he began to understand Emanuel’s insight after spending time with both Netanyahu and Palestinian Authority President Mahmoud Abbas.

Regarding AIPAC, the pro-Israel lobbying group, Obama charges that its positions moved rightward in accordance with the political shift in Israel, “even when Israel took actions that were contrary to US policy.”

He laments that politicians who “criticized Israel policy too loudly risked being tagged as ‘anti-Israel’ (and possibly anti-Semitic) and [were] confronted with a well-funded opponent in the next election.”

Obama says he was the subject of a “whisper campaign” that sought to portray him as “insufficiently supportive — or even hostile toward — Israel” during the 2008 presidential race.

“On Election Day, I’d end up getting more than 70 percent of the Jewish vote, but as far as many AIPAC board members were concerned, I remained suspect, a man of divided loyalties; someone whose support for Israel, as one of [campaign manager David Axelrod’s] friends colorfully put it, wasn’t ‘felt in his kishkes’ — ‘guts,’ in Yiddish,” he says.

While saying Republicans were less concerned about the establishment of a Palestinian state, Obama also asserts many Democratic Congress members were reticent to publicly address the matter out of concern they would lose support from AIPAC supporters and donors.

Obama also addresses his push for Israel to freeze settlement construction as part of his efforts to facilitate Israeli-Palestinian peace talks. Negotiations resumed briefly at the end of the 10 month freeze, which began in 2010, but Abbas aborted them and the moratorium was not extended by Netanyahu.

The former US president says it was “reasonable” to ask Israel to take such a step, as it was the “stronger party.” However, “as expected,” Netanyahu’s reaction was “sharply negative” and Obama says his administration came under pressure from the premier’s American allies.

“The White House phones started ringing off the hook,” Obama says, with reporters and Jewish leaders “wondering why we were picking on Israel.”

He accuses Netanyahu of an “orchestrated” push against his administration, which he says underscored that “normal policy differences with an Israeli prime minister exacted a domestic political cost.”

He also recalls a meeting with Netanyahu during the AIPAC conference in Washington in 2010. Reports at the time said Obama “snubbed” Netanyahu by leaving a tense meeting between the two.

When Emanuel told him the next day of the reports, Obama recalls “it was a rare instance when I outcursed Rahm,” referring to his chief of staff’s notoriously salty tongue.

The publication of the excerpts relating to Israel in the book come after other news outlets put out fragments concerning Obama’s successor Donald Trump, who he accuses in the memoir of fomenting racial “panic” for political gain.

He also writes that his election to the White House played a role in Trump’s rise to power by stoking racial discord, and that the divisions in American “run deep.” Trump’s departure will not be enough to bridge the divide, he says.