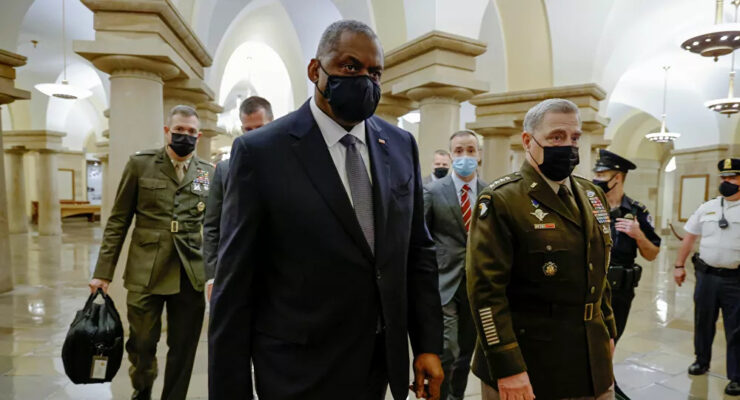 Ninety retired American generals and admirals have urged Defence Secretary Lloyd Austin and Chairman of the Joint Chiefs of Staff Mark Milley to step down over “the disastrous” US troop exit from Afghanistan.

In an open letter released on Monday, the signatories stressed that their call for the resignation and retirement of the secretary of defence (SECDEF) and the chairman of the Joint Chiefs of Staff (CJCS) is based “on negligence in performing their duties primarily involving events surrounding” the troop withdrawal.

The letter notes that both Milley and Austin should have advised President Joe Biden against the pullout, adding that if the two failed to do “everything within their authority to stop the hasty withdrawal, they should resign”.

Referring to the implications of “the hasty retreat”, the signatories underlined that it “has left initial estimates at ~15,000 Americans stranded in dangerous areas controlled by a brutal enemy along with ~25,000 Afghan citizens who supported American forces”.

“The consequences of this disaster are enormous and will reverberate for decades beginning with the safety of Americans and Afghans who are unable to move safely to evacuation points. […]The loss of billions of dollars in advanced military equipment and supplies falling into the hands of our enemies is catastrophic”, the document stressed.
The signatories also argued that damage to the reputation of the United States as a result of the troop withdrawal is “indescribable”.

“We are now seen, and will be seen for many years, as an unreliable partner in any multinational agreement or operation. Trust in the United States is irreparably damaged”, the letter pointed out.

In conclusion, the document recalled “a fundamental principle in the military” which stipulates “holding those in charge responsible and accountable for their actions or inactions”.

“There must be accountability at all levels for this tragic and avoidable debacle”, the signatories underscored, referring to the troop exit.

The letter comes as the US Department of Defence announced on Monday that all American troops had left Afghanistan, a day before the 31 August deadline earlier set by Biden, who has been repeatedly criticised over his handling of the troop withdrawal.

Many Republicans have already called for POTUS to be impeached over the issue, while the 46th president made it clear earlier this month that his decision to comply with the 2020 US-Taliban* peace deal would not be stopped.

According to Biden, he had no intention of passing the war onto another US president or send American forces to fight the Taliban when even Afghan forces willingly let the militant group gain control of the nation.

On 15 August, the Taliban entered the capital Kabul and seized power in Afghanistan following a months-long offensive, which unfolded against the backdrop of US and NATO troops leaving the nation.

Header: US Defense Secretary Lloyd Austin and Chairman of the Joint Chiefs of Staff U.S. Army General Mark Milley depart after participating in a briefing on Afghanistan for the members of the House of Representatives at the U.S. Capitol in Washington, D.C., U.S. August 24, 2021