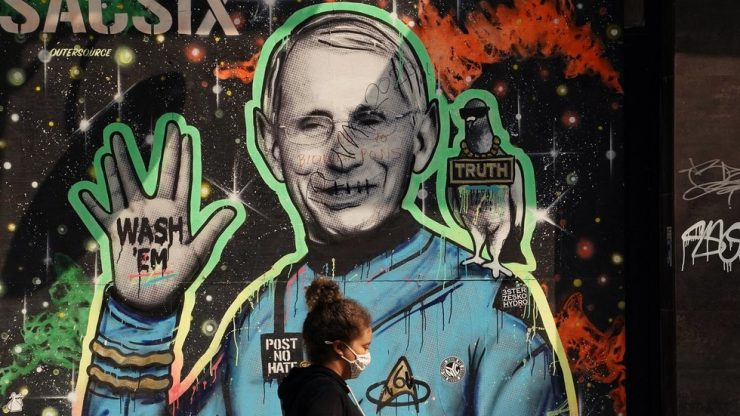 Peter Daszak, who was part of the World Health Organization (WHO) team that traveled to China to investigate the origins of the virus, sent Fauci an email on April 18, 2020 in which he thanked him for pushing back against the assertion that COVID-19 leaked from a lab.

The message is part of a tranche of emails obtained under a Freedom of Information Act request by BuzzFeed.

“I just wanted to say a personal thank you on behalf of our staff and collaborators, for publicly standing up and stating that the scientific evidence supports a natural origin for COVID-19 from a bat-to-human spillover, not a lab release from the Wuhan Institute of Virology,” Daszak wrote.

He added that Fauci’s “brave” comments were coming from a “trusted voice” and would help “dispel the myths being spun around the virus’s origins.”

Fauci responded the next day, writing: “Many thanks for your kind note.”

Daszak heads an organization, EcoHealth Alliance, which provided $3.4 million in grants from the National Institutes of Health to the Wuhan institute to study bat coronaviruses between 2014 and 2019.

He was also a member of the WHO team that traveled to Wuhan to probe the origins of COVID-19.

The investigation concluded in March that the lab-leak theory was highly unlikely, and that it was probable, but not certain, that the disease was transmitted to humans by animals. He recently dismissed suggestions that the virus leaked from a lab as “conspiracy theories.”

Daszak’s email was referring to comments that Fauci made during a press briefing on April 17, in which he was asked about theories that COVID-19 may have come from the Wuhan Institute of Virology.

Fauci responded to the query by citing a recent study that found that the virus’s mutations are “totally consistent with a jump of a species from an animal to a human.”

Fox News published an exclusive report on April 15, 2020 claiming multiple sources believed that the virus originated from the Chinese laboratory. Then-president Donald Trump had also hinted that he believed the virus may be man-made, saying at the time that the theory “seems to make sense” and that “a lot of people are looking at it.”

While such claims were initially dismissed by media outlets, the lab-leak theory has gained traction as experts and intelligence officials have claimed it may have merit.

Fauci himself said last month that he was “not convinced” that COVID-19 developed naturally, despite previously stating that it was “highly likely” that the disease had a natural origin.

Peter Daszak is a British zoologist, consultant and public expert on disease ecology, in particular on zoonosis. He is a president of EcoHealth Alliance, a nonprofit non-governmental organization that supports various programs on global health and pandemic prevention. He is also a member of the Center for Infection and Immunity at the Columbia University Maillman School of Public Health. He is known for his involvement with investigations into the outbreak which caused the COVID-19 pandemic.

He was a member of the WHO team sent to investigate the origins of the virus in China, and had previously collaborated with Shi Zhengli, the principal investigator of the Wuhan Institute of Virology.

Daszak and EcoHealth Alliance had been the only U.S.-based organization researching coronavirus spread and transmission in China.

Shi Zhengli is a Chinese virologist who researches SARS-like coronaviruses of bat origin. Shi directs the Center for Emerging Infectious Diseases at the Wuhan Institute of Virology (WIV). In 2017, Shi and her colleague Cui Jie discovered that the SARS coronavirus likely originated in a population of cave-dwelling horseshoe bats in Xiyang Yi Ethnic Township, Yunnan.

She came to prominence in the popular press as “Batwoman” during the COVID-19 pandemic for her work with bat coronaviruses.

Shi was included in Time magazine’s 100 Most Influential People of 2020.

British zoologist and the president of EcoHealth Alliance Peter Daszak is the only individual to be part of both the WHO and The Lancet teams investigating the origins of the Wuhan coronavirus pandemic. However, he has long-term professional and financial ties with the Wuhan Institute of Virology (WIV), which represents a conflict of interest.

Richard H. Ebright is the Board of Governors Professor of Chemistry and Chemical Biology at Rutgers University, and Laboratory Director at the Waksman Institute of Microbiology.

He told Taiwan News that Daszak is the contractor who funded the WIV’s research on bat SARS-related coronaviruses, with subcontracts of $200 million in USAID funding and $7 million in NIH funding.

In addition to the funding EcoHealth Alliance receives from USAID, NIH, and other agencies, which it funnels into the WIV, Ebright stated the firm received US$30 million from the US Department of Defense.

When asked whether Daszak had been involved in the controversial gain of function experiments on bat coronaviruses at the WIV, Ebright said:

“Daszak has been a contractor, a collaborator, and a co-author on work at the WIV on construction and analysis of novel chimeric coronaviruses.”