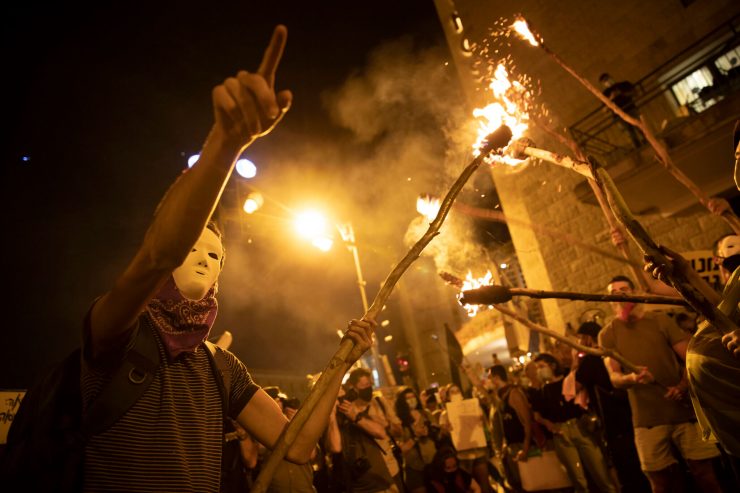 Police allowed activists thronging the streets outside the Prime Minister’s official Residence to continue their protest after midnight Saturday, in a sign of softening tactics, but later used force to disperse several hundred people who refused to leave.

An estimated 10,000 people packed Jerusalem’s Paris Square Saturday night to call for Netanyahu’s resignation, in the largest-yet rally by a burgeoning anti-government movement that has brought activists, many of them young and newly politically active, to the streets.

Tensions were especially high after a number of earlier protests saw attacks by suspected assailants against protesters, though no major incidents of violence were reported.

Police allowed the protesters to remain in the square until around 1 a.m. but once most people had left on their own, began calling for the remaining group to leave.

Eventually officers were deployed to physically remove the remaining core of demonstrators and 12 people were detained or arrested, police said.

A statement said those who remained “disturbed the public order by refusing to heed repeated calls by police to disperse on their own.”

Rank after rank of Yassam riot police entered the crowd, cutting off clusters of the remaining protesters from one another.

When several dozen protesters sat down and refused to leave the intersection, police surrounded them and began dragging them out one by one. Journalists and cameramen huddled around the scene.

One who got too close was pushed away aggressively by a police officer, despite him protesting that he was a member of the press.

Ayala, a 23-year-old resident of Kiryat Shmona, accused police of using “a lot of aggression” against non-violent protesters.

Some protesters were dragged and pinned down by police before being detained. One protester was struck in the face by a bottle of paint, although it was not clear who had thrown it.

Demonstrators, some of whom had sought permission to keep the protest going through the night, seemed to have no intention of leaving the intersection without a confrontation, repeatedly chanting “we won’t give up until Bibi resigns” — using a nickname for Netanyahu — as police dragged them away and banging drums to drown out police calls to peacefully disperse so the intersection could be reopened.

As police herded protesters away, some attempted to enter Independence Park, where some young demonstrators have erected a permanent sit-in tent, but were prevented from doing so by mounted police.

However, unlike earlier rallies, police did not deploy truck-mounted water cannons. Police had used the blasts of water to disperse protesters during July, leading to claims of police abuse and increased scrutiny of the method. Police also kept the water cannons parked during a smaller protest on Thursday night.

The Black Flag movement, which has led the push for Netanyahu to resign, had said in a statement that they were hoping authorities would allow them to stay all night.

“We are in an unprecedented event,” the group said. “The tens of thousands who flooded the capital tonight are not willing to accept the situation where a criminal defendant is crushing the dream upon which this country was established.”

Police have justified cracking down on protests after 11 p.m. by citing noise complaints from neighbors, though most protests have been allowed to continue until midnight or later.

Another protest was held outside Netanyahu’s private home in the coastal town of Caesarea, while thousands waved flags and chanted against the premier at bridges and highway overpasses across the country.

Hundreds also gathered at Charles Clore park in Tel Aviv to protest the government’s economic policies during the coronavirus pandemic. After the protest, some of the demonstrators marched toward the city’s Rabin Square, where police have barred the demonstrations from being held.

The demonstrators dispersed from each of the rallies without major police intervention.

The demonstrators, who used megaphones to make noise to draw a parallel with the loud protests against Netanyahu in Jerusalem, were eventually dispersed by police at around 2 a.m. Two arrests of activists were reported and police seized some megaphones.

In Jerusalem, police allowed demonstrators to march through the city center, in a first since the round of protests began.

Many of the protesters marched in clusters far past police barricades, waving signs and Israeli flags, while a few police buses and a water cannon were parked at the edge of the demarcated area by Ben Yehuda Street. A large crowd gathered around them, chanting slogans about Netanyahu’s alleged corruption.

While fears of right-wing violence in Jerusalem failed to materialize, police said five people were arrested for attacking protesters across the country, including an incident at a Haifa interchange in which a woman was injured by a stone thrown at the demonstrators.

Protesters have for weeks been holding regular rallies outside the Prime Minister’s Residence on Balfour Street in Jerusalem, as well as in Tel Aviv and other areas, calling on the premier to resign due to his indictment on corruption charges. They have been joined in recent weeks by people protesting the government’s economic policies during the coronavirus pandemic, with crowds in the thousands and rising.

Netanyahu has protested media coverage of the protests, which he claims blows them out of proportion. On Saturday night, he again lashed out at TV news stations, as his Likud party accused channels 12 and 13 of “delivering propaganda for the anarchist left wing demonstrations.”

“They are desperately trying to brainwash the public, in order to bring down a strong prime minister from the Right,” Likud wrote in a post re-tweeted by Netanyahu on Twitter.

Netanyahu further accused the media of “ignoring the violent nature of the protests and the calls in them to murder the prime minister and his family.”

The premier is on trial for a series of cases in which he allegedly received lavish gifts from billionaire friends and traded regulatory favors with media moguls for more favorable coverage of himself and his family. He has denied any wrongdoing, accusing the media and law enforcement of a witch hunt to oust him from office.

“Yitzhak Rabin resigned. Bibi called for Olmert to resign. He should do the same,” said activist Shai Sharberg, 31.

Matan Cohen, a student at Ben-Gurion University in Beersheba, said he was there because the government’s coronavirus response has been “shameful.”

“If this is enough for me to come all the way from Beersheba, clearly things are bad, because I’m neither very active nor very political,” Cohen said.

Maya Glasser, 28, accused Netanyahu of neglecting his duties as prime minister in the middle of the coronavirus crisis to deal with the cases pending against him.

“I’m left-wing, but at this point I don’t even care. It could even be [Yamina party leader Naftali] Bennett — we need someone, anyone who will try to lead the country,” Glasser said.

Like others, she said she would return and predicted the protests would grow.

“Each person who comes inspires more people to show up,” she said.

As with earlier protests, the demonstrations were marked by a carnival-like atmosphere amid the chants, constant banging of drums, honking vuvuzelas and even an impromptu concert by a brass band.

Liori, 35 and her husband Tal, 38, from Lehavim, brought their daughter Rona, 6 and Udi, 8, to the Jerusalem protest. Despite fears of right-wing violence, Liori said she “still brought them because it is important.”

“We are hopeful that our children will also live in the good and lovely country that we grew up in and we miss,” she said.

“I didn’t think it would be so fun,” her son said.

In one corner of the square, two massage tables were set up by an activist from northern Israel who said he wanted protesters and police to let go of their stress and Netanyahu to let go of his hold on power.

“The responses were amazing,” said Ohad, who had set up the makeshift massage parlor. “I didn’t expect anything like it, I thought we would be a weird sideshow.”