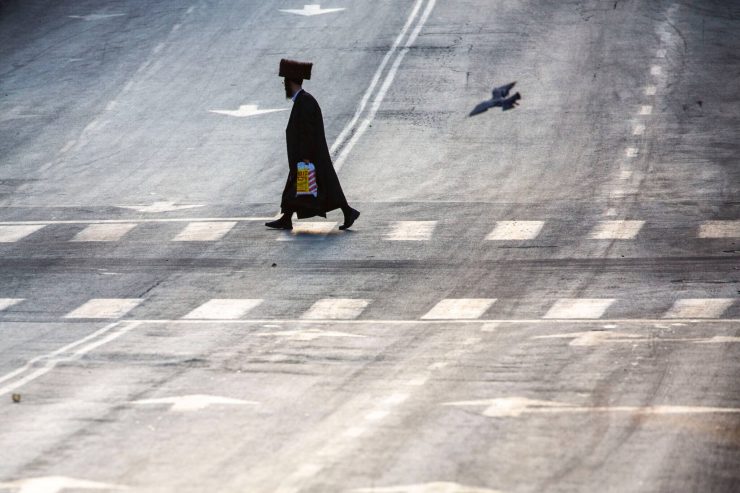 Police said they were forced to draw their guns and smash the car windscreen of an Israeli man who tried to run a roadblock set up as a new national coronavirus lockdown, the country’s second this year, entered into effect Friday at 2 p.m.

The closure, marking the first time in the world an advanced country has imposed a repeat closure to curb the pandemic, went into effect hours before Rosh Hashanah, the Jewish New Year, and will extend through other key religious holidays, including Yom Kippur and Sukkot.

In the first instance of expected attempts to violate the closure, a 49-year-old Jerusalem resident was arrested after trying to break through a police roadblock outside the ultra-Orthodox West Bank settlement of Modiin Illit.

Police said the man sped around the roadblock, only stopping when police drew their guns. He then tried to reverse away, hitting a police car. Officers eventually smashed his window to subdue and arrest him.

In a second clear violation of the lockdown, a wedding was held in the Arab village of Abu Ghosh outside Jerusalem.

Police, who were manning roadblocks nearby on the highway, were tipped off by an impressive fire works display over the local mosque.

Channel 12 reported that police at the roadblock called the local police station, which sent a patrol to disperse the wedding. It was not clear how many people took part in the wedding.

Some 7,000 policemen and soldiers, backed up by local municipality personnel, deployed throughout the country to enforce the closure using roadblocks and patrols, amid concerns that an exhausted and exasperated Israeli public will be far less cooperative with the new sweeping restrictions than during the initial wave of the pandemic.

Traffic was light on main roads on Friday afternoon, a huge change from the holiday eve traffic jams seen in normal years. In some areas police were stopping cars and turning around those without appropriate reasons for being on the road.

Senior police officials told Channel 12 that they would not start actively enforcing the closure with fines for several hours, giving people time to return home from work and reach their destinations.

“For now we are not dealing with enforcement so much as explaining things to people,” said one officer.

“We can’t enforce everything,” said another. “If there are instances of people congregating then enforcement will be stepped up,” he said.

Channel 12 reported that police feared that there would be mass prayers held in the Hassidic communities in Jerusalem and Bnei Brak and were not sure if they would be able to prevent them.

The new lockdown is simultaneously more permissive and more complex than the weeks-long closure imposed earlier this year, with numerous directives and exceptions to those directives seeming to cause public confusion as to what is and isn’t in fact allowed.

Erez Berenbaum, director of Assuta hospital in the coastal city of Ashdod, said the “lack of clarity in the instructions will lead to defiance among Israelis.”

Under the new lockdown, nearly all businesses open to the public will be closed. People must remain within 1 kilometer (0.6 miles) of home, but there are numerous exceptions, including shopping for food or medicine, going to work, attending protests and even seeking essential pet care. The public is also allowed to attend funerals or circumcision ceremonies, to exercise and more — all under strict limitations.

On the eve of the lockdown, authorities were still deciding on the details, with a rule ordering residents to stay within 500 meters of their homes extended late on Thursday to one kilometer. During the first lockdown, the limit was set at 100 meters.

Prime Minister Benjamin Netanyahu said ahead of the closure that the government had been left with no choice but to impose a lockdown.

“The health system has raised the red flag… We did everything we could to strike a balance between the health needs and needs of the economy,” he said in a televised address on Thursday.

While the government was praised for its initial handling of the pandemic, implementing a strict lockdown in March, many Israelis have expressed frustration at the cabinet’s perceived mismanagement of the health crisis in recent months.

“This is no way to close a country,” ran a headline in the top-selling daily Yedioth Ahronoth on Friday, which featured interviews with doctors, economists and teachers all opposed to the lockdown.

Israel is the first advanced country to impose a second lockdown, though many Western nations have seen a new surge of virus cases in recent weeks, and some are considering fresh restrictions.

Ahead of the start of the lockdown, the Health Ministry released data showing that “infection rates remained sky-high for Israel’s population size, with 5,238 cases identified Thursday — keeping the country near the top of the global list of daily infections per capita.”

The figure is far higher than the 1,000 daily cases the Health Ministry is aiming for before it will consider lifting some of the lockdown measures, which will see movement restricted, leisure sites closed and the education system shuttered, among other limitations.

Netanyahu warned Thursday that “there may be no choice but to tighten the restrictions” further.

He urged the public: “Wear masks and avoid gatherings.”

“The more this is done, the less there is a need for stringent measures,” Netanyahu said. “Those two steps are more important than any measures we impose.”

On Friday morning the country’s total coronavirus tally stood at 176,933, of which 46,370 were active cases. The previous day’s case count stood at 5,238, continuing the trend of around 5,000 cases per day over the past week.

Patients included 577 in serious condition (153 of whom were in ventilators) and 240 in moderate condition.

The death toll stood at 1,169, with no new deaths recorded since Thursday night.

Of the 55,697 tests analyzed Thursday, 9.4 percent came back positive.

The lockdown is the first element of the government’s three-part strategy: It is expected to last three weeks at least, dependent on situational assessments, and to be followed by several weeks of somewhat eased restrictions (including freer travel within cities but not between them, allowance of gatherings of up to 50 people, grater numbers allowed at workplaces) and finally a return to the so-called “traffic light” model in which cities will be dealt with based on infection rates.