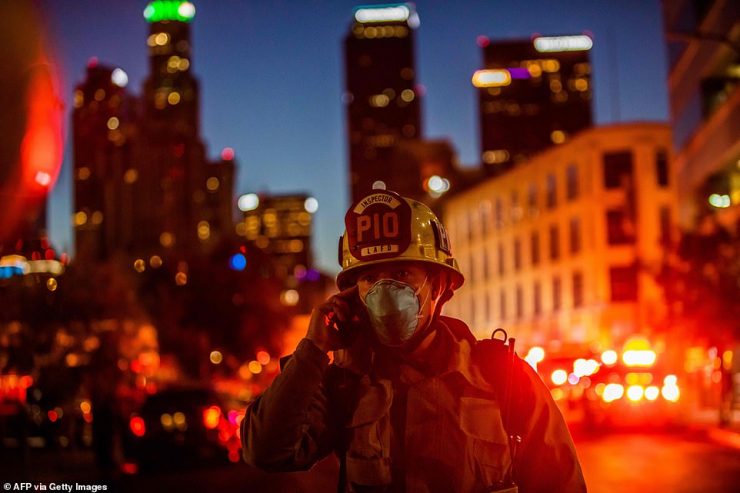 Firefighters inside had to run through a wall of flames he estimated to be as much as 30 feet high and wide.

The dramatic scenes were all caught on cellphone video and saw those who were on the roof forced to scramble down a ladder that was engulfed in fire.

Capt. Scott said people at the scene described the explosion as sounding like a freight train or jet engine. The fleeing firefighters tore off their protective equipment that had burned through and helmets that melted, Scott said.

‘The was one of the worst scene’s I’ve seen,’ he said.

Scott said the explosion shook the neighborhood and as first responders arrived they saw firefighters emerge from the building with burns and other injuries.

At least three of the 11 firefighters suffered critical injuries.

They were transported to County USC Medical Center, where they will remain overnight, to be treated for burn injuries and smoke inhalation.

Two firefighters were put on ventilators and four were sent to the intensive care unit for burns.

The LAFD were already responding to a blaze at a one-story commercial building on East Boyd St at Smoke Tokes, a hash oil supplier.

While they were on the scene attempting to put out the fire, there was nothing unusual whatsoever until suddenly a violent explosion occurred according to Los Angeles Fire Department spokesman Nicholas Prange.

The explosion occurred just as firefighters were entering the building and it resulted in a massive response by the LA Fire Department with 230 firefighters at one point at the scene.

Video showed large plumes of smoke billowing over the area and flames shooting up into the sky from one of the buildings.

The department issued a ‘mayday’ call and characterized the incident as a ‘major emergency.’ By about 7:15 p.m. the fire appeared largely under control.

The condition of those who were injured was not immediately known. News helicopters showed dozens of fire trucks at the scene.

‘We faced a very difficult situation and a significant incident. A one story commercial building was on fire when we arrived at 6:30pm when there was a significant explosion with multiple firefighters injured.

‘More than 230 firefighters arrived on scene. We managed to extinguish the flames by 8:08pm. 11 firefighters have burn injuries. The building where the fire occurred was at Smoke Tokes warehouse distributer – a supplier that makes butane honey oil.’

Butane is an odorless gas that easily ignites, and it’s used in the process to extract the high-inducing chemical THC from cannabis plants to create a highly potent concentrate also known as hash oil. The oil is used in vape pens, edibles, waxes and other products.

On its website, SmokeTokes advertises a wide variety of products including ‘puff bars,’ pipes, ‘dab’ tools, vaporizers, ‘torches and butane,’ and cartridges.

The company says it is ‘an international distributor and wholesaler of smoking and vaping products, and related accessories.’ Founded in 2009, it offers ‘discounts to loyal customers, fast shipping, a huge catalog of products and customer service that is untouched.’

As firefighters aimed hoses at the long-slung building where the explosion occurred, others could be seen standing next to gurneys that had been readied for the injured.

The blaze occurred very close to Skid Row residents where many homeless people are camped out on the streets living close to senior and low income housing.

‘We know we’re at risk when we go to any emergency, but we never want to see this happen. So we’re hoping that all these firefighters can recover,’ Prange from the LAFD said.

‘We’re always worried about a secondary explosion, we don’t know what caused the first one and we’re trying to avoid this incident becoming even worse if the second one does happen,’ Prange told KTLA.

The department upgraded the incident to ‘ a major emergency’ with the firefighters going into defensive mode as they battled the flames, LAFD said at 7pm.

Firefighters were seen pouring water on the flames from outside, unable to go inside the burning buildings.

At one point, firefighters attempted to put out the fire and aimed their hoses from the roof of an adjacent building.

‘A medical branch has been created for treating and transporting injured firefighters,’ LAFD said.

No information was available on the conditions of the firefighters or the nature of the ten who were injured.

It was not immediately known what type of business was in the building or what caused the explosion in the first place.

The LAFD urged people in the area to find a way to shelter from the smoke.

In a tweet, Los Angeles Mayor Eric Garcetti said, ‘My thoughts are with our brave LAFD firefighters. Closely tracking this situation as we continue to get more information.’