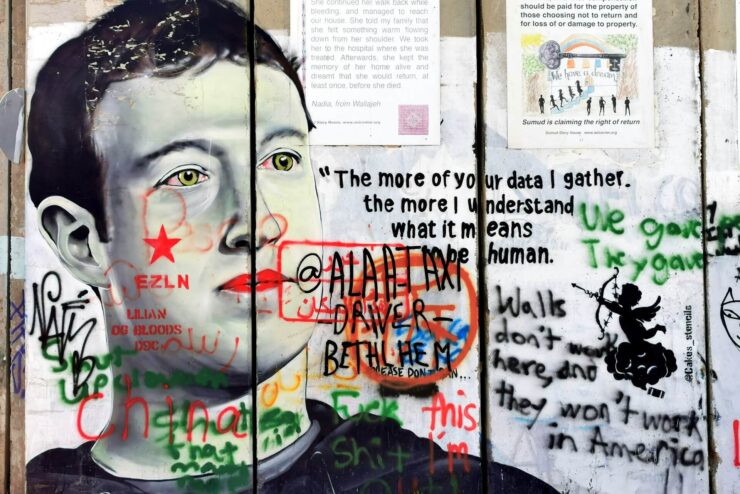 In the global imagination, Facebook would be a responsible social network that allows everyone to connect confidentially while censoring messages contrary to local laws. In practice, it is quite different.

Facebook collects information about you for the NSA, censors your opinions and mints its own currency. In a few months, this company has become one of the most influential players in world politics.

The most important political player on the Internet is the social network Facebook. As of January 1st, 2021, it had 2.85 billion monthly active users and 1.88 billion daily active users worldwide.

The social network routinely censors posts that include nude photos, sexual activity, harassment, hate speech, forgeries, spam, terrorist propaganda or violence using particularly crude and unfair artificial intelligence. It shuts down accounts that it deems dangerous, either because they have been censored several times or because they are linked to enemies of the United States.

Facebook now issues its own currency as a state, the Libra. It is backed by a basket of currencies composed of 50% dollars, 14% yen, 11% Serling pounds and 7% Singapore dollars [1].

By becoming a bank whose currency is progressively accepted by Internet sales sites, Facebook is building a parallel economy, both virtual and global, that is larger than the economy of many states.

Facebook calls on its users to detect accounts that violate its rules. It opens a file on each of its informants and notes them [2].

Facebook, which claims to treat every user equally, has secretly compiled a list of 5.8 million VIPs to whom its rules do not apply. Only they can say and show everything [3].

CAMBRIDGE ANALYTICA AND THE NSA

The personal data of at least 87 million users was targeted and siphoned off by the British company Cambridge analytica (of billionaire Robert Mercer and Steve Bannon) and its Canadian subsidiary, AggregateIQ [4]. They were used at least :

And above all during the US presidential campaign also in 2016, successively for Ben Carson, Ted Cruz [6], and finally for Donald Trump and his campaign manager… Steve Bannon.

According to The Observer, Cambridge analytica employed many figures from the British military-industrial complex and MI6 propaganda services [7].

Perhaps this is just the tip of the iceberg: Edward Snowden revealed that Facebook had joined the ultra-secret PRISM electronic surveillance network allowing the National Security Agency (NSA) to access the personal data of all its customers. But nothing has leaked out about what use the NSA makes of it.

According to Newton Lee, a former researcher at the Institute for Defense Analyses, the PRISM network is the avatar of the Total Information Awareness (TIA) project that Admiral John Poindexter developed under Donald Rumsfeld at the Defense Advanced Research Projects Agency (DARPA) [8].

In 2011, Facebook, at the request of Israel, censored accounts calling for an uprising in the Palestinian territories

In 2012, Mark Zuckerberg, personally committed himself to Nobel Peace Prize winner Shimon Perez. He oversaw the creation and promotion of the Israeli president’s official page, and created a video campaign called “Be my friend for peace”, featuring Nicolas Sarkozy, David Cameron, Recep Tayyip Erdoğan or even Queen Elizabeth II of England, among others.

In 2015, Facebook declared Hezbollah and the Syrian Arab Republic “terrorist organisations”. It closed the accounts of several TV channels including Al-Mayadeen (then the most watched news TV in the Arab world), Sama and Dunia (two Syrian public TVs) and Ikhbariya (a Syrian private channel). At the same time, it provided trainers to the jihadists fighting the Syrian Arab Republic.

In this regard, Facebook does not censor all messages of hatred or violence. For example, it encourages the account of opponents of Syria that collects information (name, address, photo) of Syrian nationalists in order to assassinate them.

In 2010, Nature published a study on “An experiment in social influence and political mobilisation on 61 million people” [9]. Researchers from the University of California show that political messages on Facebook during the US mid-term elections had a very large impact not only on the users of the social network, but also on their friends and even on their friends’ friends.

In 2014, Facebook, without the knowledge of its subscribers, conducted a study on “Experimental evidence of large-scale emotional contagion via social networks” [10].

In 2018, Facebook partnered with the Atlantic Council, an influential think tank funded by NATO, to “promote US leadership and engagement in the world with its allies”. The specific aim of the partnership is to ensure “the proper use of Facebook in elections around the world, monitoring misinformation and foreign interference, helping to educate citizens and civil society” [11].

Ultimately, in 2020, Facebook engaged in colonial politics in Africa with its proposed undersea cable encircling the continent, 2Africa. This network would link the main ports, but would not penetrate inland [12]. It is only a question of serving the elites who participate in the plundering of the continent and the shipping of its wealth to the West.

Internationally, Facebook’s director of public relations is the Liberal Democrat Nick Clegg. He was a deputy to British Prime Minister David Cameron. Facebook France is headed by Laurent Solly, former chief of staff to President Sarkozy and then second in command of the private television channel TF1. He is the husband of Caroline Roux, a star journalist for the public television channel France2.

Facebook is neither in the service of the Democrats nor the Republicans. It is a company that defends the interests of the “American Empire” by using both its knowledge of its users and the emotions it spreads among them.

From this point of view, it is particularly interesting that in 2017 Mark Zuckerberg thought of becoming President of the United States without having to run for office.

He had put together a campaign team before giving up. His plan was to lean on the Democratic Party to remove President Donald Trump from office, then get close to Vice President Mike Pence so that Pence would hand over the office to him when he automatically became president, and finally lean on the Republicans to get Pence to resign and become president himself. [13].

In 2010, Facebook censored Wikileaks, the association that revealed the Pentagon’s practices and thus undermined the “American Empire”.

In 2010-11, the platform, officially supported by the US State Department, exploded during the ’Arab Spring’ in the ’wider Middle East’.

In 2020, Facebook closed accounts linked to the French army in Central Africa and Mali. The latter were running a campaign that did not correspond to that of the Pentagon.

In 2021, Facebook closed the accounts of the incumbent presidents of Uganda, Yoweri Museveni, and the United States, Donald Trump.

A British association, Full Fact, has created a coalition between the competent ministries of the United Kingdom and Canada on the one hand, and information giants (Facebook, but also Twitter, Alphabet and Reuters) on the other, in order to fight misinformation on the English-speaking Net.

Facebook does not limit itself to fighting against Fake News. It has just created a programme, “News Innovation”, to support the written press. It has already been deployed in Canada, Argentina and Brazil. It has signed more than $10 million worth of contracts focusing on media that support Justin Trudeau in Canada or are hostile to Alberto Fernandez and Cristina Fernández de Kirchner in Argentina and Jair Bolsonaro in Brazil.

The Biden administration worried – before the public – about the rise of Facebook, which it sees as a rival. The company sets its own borders, enforces police and justice on its network, and issues its own currency. It may currently serve the Pentagon, but all it needs is an army to become a state.

This is why the Biden administration introduced whistleblower France Haugen to The Wall Street Journal and then to the Senate. The debates focused on the deleterious influence of Facebook on certain children. This is a way to put the social network in its place without asking the political questions we have just listed.

The only person in the US today who is asking the question of the political influence of digital giants is former President Donal Trump.

He has just filed a lawsuit against Twitter for taking his account offline while he was still the sitting president of the United States. Trump is relying on the confidences of Democratic senators who have boasted of having pressured Twitter. This proves, he says, that the censorship is not a business decision, but a political one; that it violates the 1st Amendment of the US Constitution on free speech. His lawyers make it clear that Twitter has never censored violent speech. It hosts an account of the Taliban government of Afghanistan.

[2] “Facebook is rating the trustworthiness of its users on a scale from zero to 1”, Elizabeth Dwoskin, The Washington Post, August 21, 2018.

[4] Mindf*ck: Cambridge Analytica and the Plot to Break America, Christopher Wylie, Randon House (2019). Targeted: The Cambridge Analytica Whistleblower’s Inside Story of How Big Data, Trump, and Facebook Broke Democracy and How It Can Happen Again, Brittany Kaiser, Harper (2019).

[7] «The great British Brexit robbery: how our democracy was hijacked», Carole Cadwalladr, The Observer, May 7, 2017.

Note: The statements, views and opinions expressed in this column are solely those of the author and do not necessarily represent those of stiriinternationale.ro