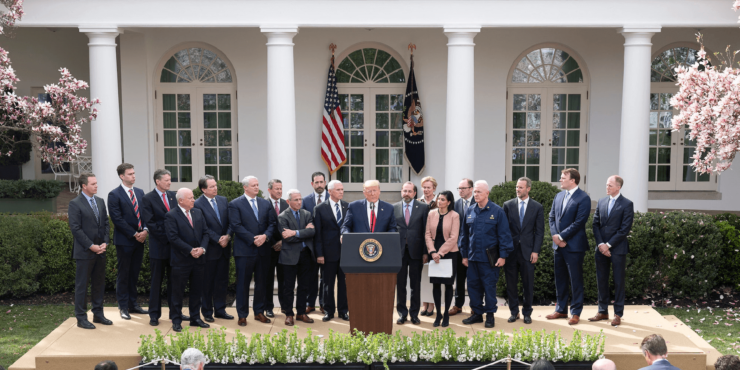 US President Donald Trump has said that nationwide coronavirus guidelines will be extended for another month, citing model data suggesting that the US should brace for the death rate to peak in two weeks.

“The peak – the highest point of death rates… is likely to hit in two weeks,” Trump said as he delivered an update on the coronavirus situation in the US on Sunday.

Citing estimates suggesting that if social distancing guidelines had not been introduced, 2.2 million people could have died as a result of the pandemic in the US, Trump said that it was essential to prolong the existing measures until the end of April.

“Now we’re looking at numbers that are much, much lower than that,” he said.

Speaking on CNN’s ‘State of the Union’ earlier on Sunday, Trump’s Covid-19 adviser Dr Anthony Fauci claimed that “between 100,000 and 200,000 deaths” may occur, according to the latest predictions. Fauci, however, noted that trying to forecast how rapidly the virus would spread in the US was like “chasing a moving target.”

In contrast to his previous rhetoric, the US president appeared to call for patience, warning against celebrating victory over the deadly disease that has claimed over 2,430 lives in the US before the outbreak is stopped.

“Nothing would be worse than declaring victory before the victory is won. That would be the greatest loss of all.”

Asked whether it was possible that the guidelines would be extended even beyond April 30, Trump said that he hopes it would not be necessary.

Trump, who previously said that he would like to “reopen” the US economy, plagued by lockdowns, by Easter, clarified that although he believed it “would be a great thing if we could do it by Easter,” that does not seem to be a viable scenario any longer. “Easter should be the peak number,” he added.

Instead, he predicted that the economy would start rebounding off the current slump, which has seen the US stock market cratering and unemployment claims soaring, by summer.

“We can expect that by June 1, we will be well on our way to recovery… A lot of great things will be happening”

Nearly 140,000 people have tested positive for Covid-19 across the US, which now leads the world in the number of infected by a large margin. Trump, however, attributed the surge to the US government doing “far more testing than anybody in the world,” noting that in comparison to the other hard-hit countries, the US has a much lower mortality rate.

Earlier this week, Trump toyed with the idea of imposing a quarantine on New York, New Jersey and Connecticut, which he described as emerging “hotpots” of the disease as the number of combined cases in the area crossed the 65,000 milestone. After the proposal drew fierce pushback from New York Governor Andrew Cuomo, however, Trump decided against the idea, with the the Centers for Disease Control and Prevention on Saturday issuing a 14-day travel advisory to the tri-state area instead.