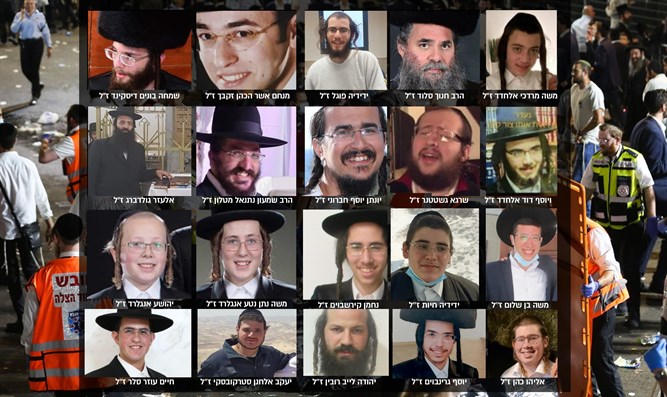 Police on Monday detained for questioning two engineers who were involved in approving arrangements at a religious festival last month where 45 people were crushed to death in an overcrowded walkway.

Investigators from the Lahav 433 national crime unit brought in the safety engineer and the safety adviser who signed off on the Lag B’Omer festival at Mount Meron.

It marked the first formal questioning or gathering of testimony by police as they probe the disaster that happened 11 days ago.

Police also visited the offices of the engineers in the Arab town of Ka’abiyye to search for relevant documents, Channel 13 News reported.

Last week Attorney General Avichai Mandelblit announced that a joint investigative team from the Israel Police and the Justice Ministry’s Police Internal Investigations Department will lead a probe into the deadly incident.

In a statement, Mandelblit said the team will be assisted by the State Attorney’s Office, including the stand-in state prosecutor, Amit Aisman.

Police and the PIID had already launched independent probes. State Comptroller Matanyahu Englman had also announced that he will investigate the matter.

There have been increasing demands for a state commission of inquiry into the tragedy, with the focus directed at the organization of the annual Lag B’Omer events at Mount Meron.

Though political leaders, including Prime Minister Benjamin Netanyahu, have urged a thorough investigation, so far there has been no move to set up a commission of inquiry, as many current and former government officials have called for.

The incident came as Israel is under a transitional government following the March election. A bloc of parties negotiating to form a coalition that would replace Netanyahu is reportedly intending to establish a commission should it succeed in setting up a government.

The disaster, which began around 1 a.m. on April 30 near the gravesite of the second-century sage Rabbi Shimon Bar Yochai, took place when huge crowds of ultra-Orthodox pilgrims were making their way along a narrow walkway with a slippery metal flooring that ended in flights of stairs.

People began to slip and fall, others fell upon them, and a calamitous crush ensued.

The site, the second-most visited religious site in Israel after the Western Wall, has become an extraterritorial zone of sorts, with separate ultra-Orthodox sects organizing their own events and their own access arrangements, with no overall supervision and with police routinely pressured by cabinet ministers and ultra-Orthodox politicians not to object.

Former police officials have said there had been fears for years that tragedy could strike as a result of the massive crowds and lack of supervision on Lag B’Omer.

Multiple reports in Hebrew media outlets indicated that there had been immense pressure by religious lawmakers ahead of the festivities to ensure that there would be no limits placed on the number of attendees due to the COVID-19 pandemic.

A framework drawn up by the Health Ministry, in consultation with other government officials, police and others, would have limited the event to 9,000 participants but was not implemented.