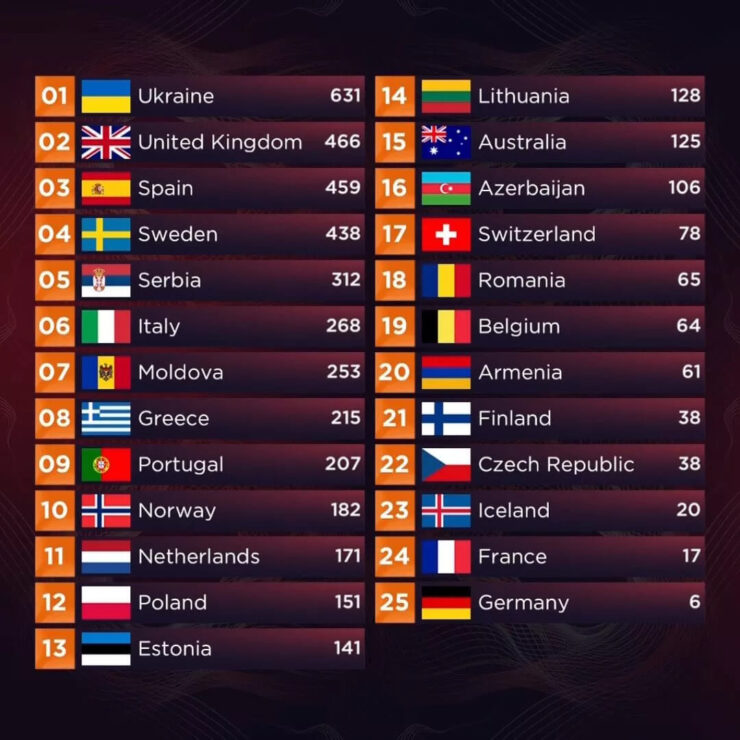 Ukraine’s Kalush Orchestra has won the Eurovision Song Contest 2022, after making a plea on stage to help save Ukrainian fighters holed up in Mariupol, and receiving landslide support from the European public in a phone and online vote.

“We will do our best to one day host the participants and guests of Eurovision in Ukrainian Mariupol,” the president added, referring to the Azov Sea port city currently controlled by Russian forces.

The Ukrainian folk-rap group’s frontman, Oleh Psiuk, says the winning song ‘Stefania’ was written as a tribute to his mother with no political message in mind, but it has nevertheless turned into a symbolic anthem for many Ukrainians.

On Saturday, Psiuk took the stage with a plea to a live audience of some 7,500 in the Italian city of Turin, and millions more watching from home.

Last week, both Russia and Ukraine said the evacuation of civilians from the sprawling industrial complex was complete.

And Ukraine received 439 points from the public! #Eurovision pic.twitter.com/JWP8stwleb

Eurovision is meant to be non-political, and contestants can be disqualified or fined for breaking this rule.

“We understand the deep feelings around Ukraine at this moment and believe the comments of the Kalush Orchestra and other artists expressing support for the Ukrainian people to be humanitarian rather than political in nature,” said the European Broadcasting Union.

Ukraine was a clear favorite ahead of the finals, with bookmakers giving it a 60% chance of winning, amid overwhelming Western support for Kiev in its struggle against Moscow.

After the jury vote, Kalush Orchestra scored fourth with 192 points, but an immense 439 points from the European public propelled it to the top, despite claims that Russian hackers could try to disrupt the voting.

Russia attacked Ukraine in late February, following Kiev’s failure to implement the terms of the Minsk agreements, first signed in 2014, and Moscow’s eventual recognition of the Donbass republics of Donetsk and Lugansk. The German- and French-brokered protocols were designed to give the breakaway regions special status within the Ukrainian state. Mariupol is claimed by the breakaway Donetsk republic as an integral part of its territory.

The Kremlin has since demanded that Ukraine officially declare itself a neutral country that will never join the US-led NATO military bloc.

Kiev insists the Russian offensive was completely unprovoked and has denied claims it was planning to retake the two republics by force.

This site uses Akismet to reduce spam. Learn how your comment data is processed.