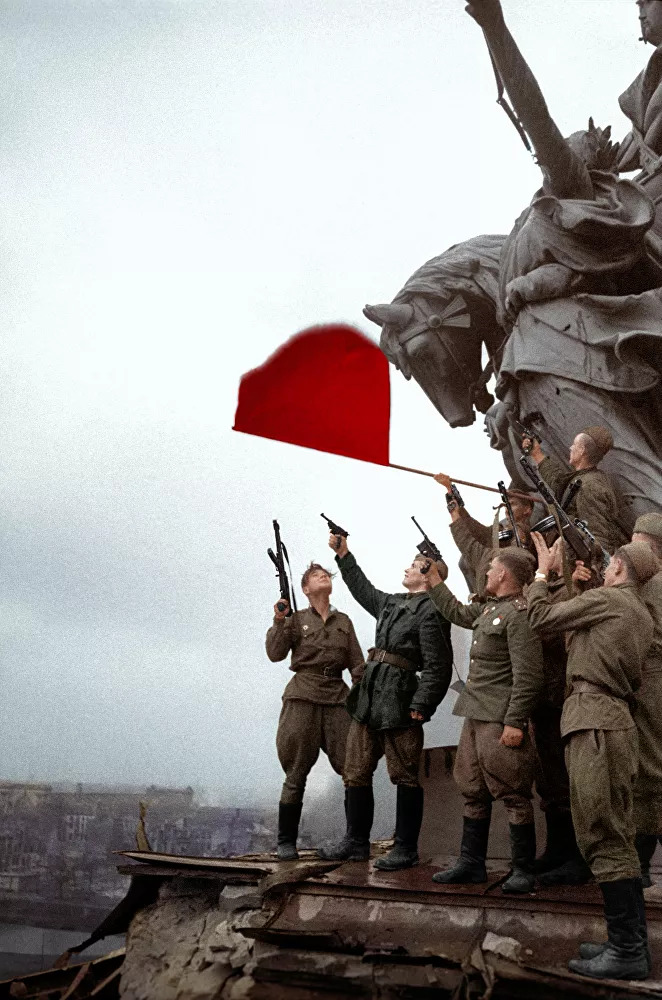 This is no oversight or simple historical illiteracy. It is part and parcel of a mobilization that is taking place in the United States today for a new, and more serious, confrontation with Russia.

On May 7, to mark the 75th anniversary of VE-Day, the US government issued two extraordinary statements. The first boasted as its authors US Secretary of State Mike Pompeo, and the foreign ministers of Hungary, Poland, Czech Republic, Slovakia, Romania, Bulgaria, Latvia, Lithuania and Estonia.

Bizarrely, the statement had nothing to do with the liberation of Europe from Nazism, though perhaps less surprisingly, considering that both Bulgaria, Romania and Hungary actually started the war on the side of the Axis.

The statement veered off immediately into a familiar Cold War diatribe:

“While May 1945 brought the end of the Second World War in Europe, it did not bring freedom to all of Europe. The central and eastern part of the continent remained under the rule of communist regimes for almost 50 years. The Baltic States were illegally occupied and annexed, and the iron grip over the other captive nations was enforced by the Soviet Union using overwhelming military force, repression, and ideological control.”

On May 8, 1945, America and Great Britain had victory over the Nazis!

“America’s spirit will always win. In the end, that’s what happens.” pic.twitter.com/umCOwRXWlB

Such a statement is an affront to history and to humanity. The USSR was central to the victory over Nazism.

Consider the record: for three years, from June 22, 1941, to June 6, 1944, the USSR fought Nazi Germany almost single-handedly. No one before the Red Army had been able to defeat the seemingly invincible Wehrmacht. After stopping the Germans just outside the gates of Moscow in December 1941, the Red Army went on to score one extraordinary victory after another. The battles of Stalingrad, Kursk, Kharkov, Belgorod, Smolensk, Dnieper, Kiev, Crimea among many others, including the lifting of the siege of Leningrad, inflicted devastating defeats on the German armed forces.

So catastrophic were these defeats that, in the summer of 1944, when the Red Army had moved outside of the borders of the USSR to take the war into Germany itself, the Wehrmacht was but a pale shadow of the army that had conquered most of continental Europe with such ease from 1939 to 1941. It was in retreat everywhere, as the Red Army pushed on not only into Berlin, but into the Nazi-occupied countries: Czechoslovakia, Bulgaria, Romania, Hungary, Yugoslavia.

When the United Kingdom, the United States and Canada launched their invasion of Europe, they were facing a German military machine that had already been defeated. Out of some 300 divisions, the Germans deployed only 58 in France, Belgium and the Netherlands, in anticipation of the forthcoming invasion.

The simple truth is that, had the Wehrmacht not already been largely destroyed – and engaging in bitter battles with the Red Army on numerous fronts in the east – the D-Day landings could not have taken place.

There would have been no liberation of Europe. Trump’s “America and Great Britain” were successful only because the Red Army had already done most of the heavy lifting.

Serious historians, of course, acknowledge that it was the fight between the USSR and Nazi Germany that decided the outcome of World War II. In ‘Absolute War: Soviet Russia in the Second World War’, historian Chris Bellamy writes that, during the fighting on the Eastern Front, “the greater part of the land and associated air forces of Nazi Germany and its Axis partners were ultimately destroyed by the Soviet Union.”

Soviet heavy lifting came at an extraordinarily steep price. The staggering numbers tell their own tale.

Soviet military deaths are estimated to be around 8.7 million, but Soviet civilian deaths caused by famine, disease and war crimes are somewhere in the order of 19 million.

Contrast those numbers with the American figures: the US suffered 552,117 casualties in the European theater of operations in the period between June 1944 and May 8, 1945.

From that number, 104,812 were killed in action, according to the US Department of Defense.

It is notable that Russian leaders never seek to belittle the contribution of their allies to the joint war effort. Not so the leaders of the US and the UK.

Their attitude toward Russia’s sacrifices has undergone a dramatic change. Contrast Trump and Pompeo’s flippant comments with those of President John F Kennedy in his famous American University commencement address in June 1963:

“No nation in the history of battle ever suffered more than the Soviet Union suffered in the course of the Second World War. At least 20 million lost their lives. Countless millions of homes and farms were burned or sacked. A third of the nation’s territory, including nearly two-thirds of its industrial base, was turned into a wasteland – a loss equivalent to the devastation of this country east of Chicago.”

President Richard Nixon echoed similar sentiments during his televised address to the Soviet people in May 1972.

Kennedy and Nixon both sought a working relationship with the Soviet Union, and understood that, given the horrific experience of World War II, no one in their right mind would want another war. Today’s Washington is a very different place. It is filled with people itching for war. And belittling, dehumanizing and disrespecting the Russian people is the best way to lay the groundwork for it.