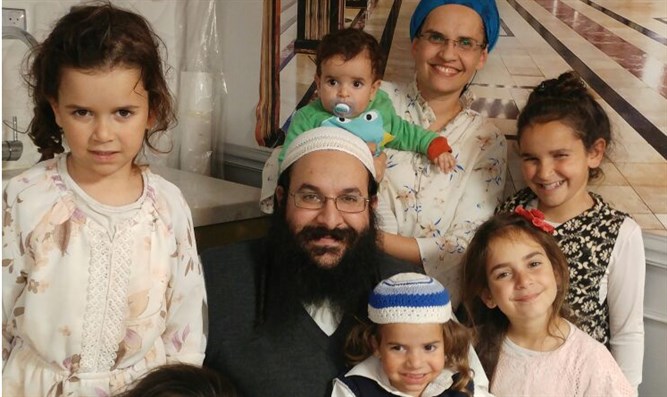 Rabbi Raziel Shevach Hy”d (may God avenge his death) was murdered in a terror attack near Havat Gilad in Samaria in 2018. In a Facebook post, his widow Yael, who is now raising the couple’s six children alone, expressed her anguish at recent developments on the political scene, specifically, the plan of the Blue & White party and its leader Benny Gantz to cooperate with the predominantly Arab Joint List in order to form a government.

“If I had to pick a headline to summarize the last day, I think the most apt would be ‘System Error.’

“I never believed I would look at [the picture of] my husband’s happy face and feel shame. I am ashamed. I am ashamed that our leaders have strayed from the correct path so brazenly. That they have given a free pass to our enemies. That they are happy to have received their recommendation [to form a government].

“I did not vote for you, Gantz, [even though I had no idea] what was hidden behind your burning hatred of our Prime Minister. Maybe many more people like me would have trusted you if they had thought that you would lead them proudly.

“I hope no one will ever vote for you again. You are a pitiful, contemptible man. You don’t deserve that anyone should so much as glance in your direction.

“In a few days, I will be celebrating the third birthday of my son, Benayahu, together with my six children. Benayahu, my baby, who has lived more of his life without a father than with one.

“I will stand there with my family at the grave of my husband, Raziel, who was murdered solely because he was a Jew, and then later, I will cut Benayahu’s hair (for the traditional first haircut at the age of three- ed.). Then I will pray that you [Gantz] will never become leader, that you never get anywhere near the leadership of our country.”

“Gantz, you have sinned. You, together with your friends. And there’s no way you can fix this.”

“I’m about to take an extended break from using Facebook. Here I express my pain, and I hope that when I return, I will be stronger. I don’t have the strength for this anymore.”