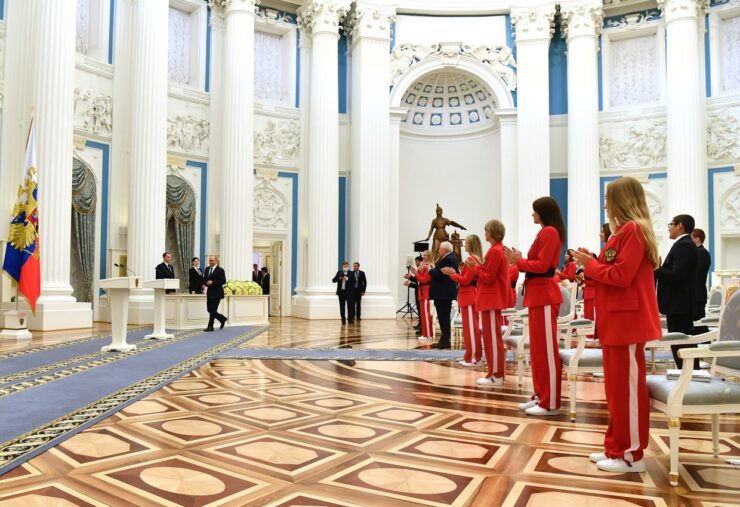 President Vladimir Putin has hailed Russia’s Olympic medalists at a special Kremlin ceremony, praising their achievements in Tokyo and their strength in overcoming obstacles – including ‘politicized’ decisions against Russia.

Russian athletes were forced to compete under the banner of the Russian Olympic Committee (ROC) in Japan due to sanctions imposed by the World Anti-Doping Agency (WADA) over allegations that a Moscow laboratory tampered with doping data.

The ROC team finished fifth in the medal table in Tokyo, capturing 71 Olympic prizes in total – including 20 gold, 28 silver, and 23 bronze medals.

Many of those medalists were present at a Kremlin ceremony on Saturday where awards were handed out to prominent performers and the athletes were praised by Putin.

“Russian athletes performed honorably at the Tokyo Olympics. I understand that it wasn’t easy, perhaps at some moments it was prohibitively difficult,” said Putin.

“There were also severe restrictions due to the pandemic. I cannot help but recall the well-known and, unfortunately, politicized decisions regarding our country and our team which are far from sport…

“But you overcame all these difficulties and fought for the sporting pride of Russia. In every sense, the gold [medalists] – you are the main heroes and, and I’m not afraid to use this word, the pride of Russia.”

Chigireva, 26, became a double gold medalist in the team event in Tokyo as she added the 2020 Olympic crown to the one she claimed with her teammates in Rio five years ago.

“Only your tough stance towards our athletes on the world stage helped us achieve such success and still perform at the Olympics and defend the honor of our country,” Chigireva was quoted as saying.

Russian medalists were not only feted with kind words at the Kremlin for their efforts.

A fleet of gleaming new BMWs was also ready to be awarded to Olympic prize-winners.